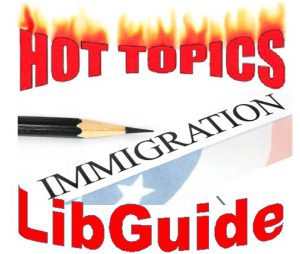 The United States is a nation built by immigrants, so why is the topic so controversial? In fact, it has a long history of controversy and is still one of the hottest topics in the country today. The Hot Topics: Immigration LibGuide traces the history of immigration in the United States, where public sentiment has ranged from welcoming to hostile over the years. It looks into the issues that still divide us on this topic by gathering together relevant resources of all kinds.

END_OF_DOCUMENT_TOKEN_TO_BE_REPLACED

National Origami Day celebrates an art that is almost as old as paper itself. The art of origami evolved over centuries, leaving a paper trail, so to speak, that spans cultures and countries. Though the origins of origami not entirely clear, this much is certain, this tradition could not have predated the invention of paper. Origami is literally the art of paper folding, whose very name is derived from the Japanese words, ori, meaning to fold and kami, meaning paper. Despite its close association with Japan, it would not have been possible without China’s invention of paper in sheet form in 105 A.D. It is likely that the precursors of origami, known in China as zhezhi or folded paper, developed shortly thereafter.

It took another 400 years before paper made its way to Japan in the 6th century by way of Buddhist monks. Origami in Japan was first used exclusively in religious ceremonies due to the expense of paper. Later, wealthy families who could afford this expensive handmade material, began to use paper for their correspondence. They liked to include an intricately folded piece of paper with their letters, partly to flaunt their wealth. It would be another 13 centuries before Japan’s industrial revolution in the late 19th century made paper available to the masses. It was not long before origami was embraced as a leisurely activity and raised to an art form.

Of course, origami eventually found its way to Europe, possibly evolving from napkin folding, a popular practice in the 17th century. Paper folding really took off when it became part of the German kindergarten school curriculum. The founder of kindergarten, Friedrich Fröbel, believed it to be an easy way to introduce geometry. This early exposure to paper folding led to the flourishing of origami across Europe.

The United States was a little slower to discover origami; New Yorker Lillian Oppenheimer introduced it to the U.S. and Great Britain in the 20th century. Her OrigamiUSA organization is still active today with an annual two-week convention beginning on her birthday, October 24th and ending on November 11th, National Origami Day.

Facts Along the Paper Trail

True origami uses only a single sheet of square paper, folded without use of scissors, tape, or markings, and constructed entirely through folds. You could think of it as a logic problem or brainteaser, but many people are up to the challenge, as evidenced by the many books and patterns available.

Kirigami is a variation that allows the use of strategic cuts. It comes from the Japanese words “kiru” (to cut) and “kami” (paper).

Golden paper nuggets (yuanbao) became a part of traditional Chinese funerals by around 900 AD. They were folded in the likeness of ingot currency and with the intention of being cast into a fire at the end of the ceremony.

No story about origami would be complete without mentioning the tradition of folding 1000 paper crane within one year. It is said that accomplishing this will grant you happiness and eternal good luck. Why 1000 cranes? Cranes in Japanese folklore are said to live 1000 years. Origami cranes that are folded into a group of 1000 are called senbazuru and are usually made of many different colors of paper, and strung together to be hung from a ceiling.

You can read more about these and many other fascinating facts about origami and its history at these links:

Origami: How the Ancient Art of Paper Folding Evolved Over Time and Continues to Inspire

A Brief History of Origami

The History of Origami (All About Japan)

The Story of Sadako Sasaki and the Hiroshima Peace Cranes 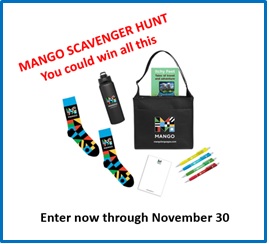 Do you love mangos? Me too, but this scavenger hunt is not about finding mangos; it is all about discovering language! Mango Languages is an interactive and fun way to learn any one of 70 languages.  Go traditional with Italian or French or Spanish, or go a little rogue with Swahili, Thai, or Uzbek.  Or, just for a bit of fun, learn Pirate or Shakespeare.

END_OF_DOCUMENT_TOKEN_TO_BE_REPLACED

What are your plans for the week of September 26th through October 2nd? Be sure to leave room on your calendar for library activities and contests as we celebrate Banned Books Week. But first, maybe you are not sure what Banned Books Week is all about. Are we really banning books? Will there be a bonfire? Actually, it is quite the opposite; it is all about celebrating our freedom to read without censorship. Books on all topics are available in our libraries and bookstores to anyone who wants to read them. Try to imagine not having this freedom and choice. That freedom, that we take for granted, is worth protecting and celebrating, and is precisely why we set aside a week every year to do just that.

END_OF_DOCUMENT_TOKEN_TO_BE_REPLACED

The elephant is the largest land mammal on earth, yet it is also one of the most fragile. Where once the mighty elephant roamed the African and Asian jungles and forests in large numbers, now both species of African elephant (the savanna elephant and the forest elephant), as well as its smaller cousin, the Asian elephant, are endangered. To bring awareness to the plight of the elephants and to protect them from further harm, World Elephant Day was created in 2012 and is celebrated every August 12.

END_OF_DOCUMENT_TOKEN_TO_BE_REPLACED 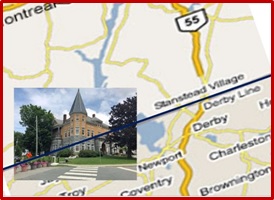 Is the Haskell Free Library and Opera House in Vermont or in Quebec? Turns out it is in both! You may think this happened accidentally, but in fact, it was deliberately built right smack on the U.S. Canada border in 1905, half of it in Derby Line, Vermont and the rest in Standstead, Quebec. It was not designed as a novelty attraction, but rather as a way to honor the memory of Carlos Haskell, a prominent merchant in Standstead. Back at the turn of the century, the border was a rather casual thing, and the residents of both communities freely crossed it without much more than a friendly wave to the customs agents. In fact, the two towns functioned more as a single community with residents visiting, shopping, eating, seeing doctors, and generally conducting business in both towns with no thought to the border. So it made sense that the widow of Carlos Haskell would want to give the whole community a gift in his name, specifically a library with an opera house on the second floor, that was meant to be both a center for learning and for culture for the residents of both towns.

END_OF_DOCUMENT_TOKEN_TO_BE_REPLACED 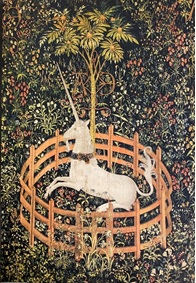 Unicorns, those mythical creatures that capture the imagination of every child, are celebrated each year on April 9.  In spite of their imaginary existence, this horse-like creature with the single large spiral horn, has been found throughout history.  They appear in early Mesopotamian artwork and are described in myths and stories from ancient China, India, and Greece. The Celts, Romans, and Persians also wrote of a white magical horse with a single horn. As early as the 12th century, unicorns were seen on Scottish coats of arms; in fact, the unicorn remains the national animal of Scotland to this day. It is known that in the Middle Ages, the tusks of narwhal whales were often fraudulently sold as unicorn horns. They were valued for their magical powers to cleanse poisoned water and to heal the sick, especially their tears and blood. At the height of popularity, they were sold for ten times their weight in gold. Unicorn powder was sold in London pharmacies as an antidote for poison as late as the 18th century. Whatever its origin, the unicorn remains popular today, especially with children, adorning backpacks and folders, clothes and birthday cakes.

END_OF_DOCUMENT_TOKEN_TO_BE_REPLACED 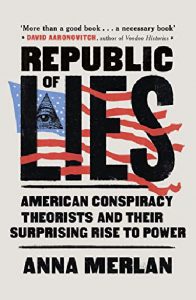 Conspiracy theories are as old as civilization and have been part of our own country’s history from the very beginning. In her book Republic of Lies: American Conspiracy Theorists and Their Surprising Rise to Power, author Anna Merlan takes us on an eye-opening, mind boggling, ride through all manner of conspiracy theories. Her quest into this strange world began as a reporter with an assignment to write a piece on the subject.  As part of her research, she went on a Conspira-Sea Cruise, whose other passengers all enthusiastically and earnestly believed in conspiracy theories of every kind. The experience stayed with her long after her story appeared, and a year and a half later, she began delving deeper into this phenomenon, where she encountered a strange, often dangerous world.

END_OF_DOCUMENT_TOKEN_TO_BE_REPLACED

If you have been on campus lately, you will have noticed the greenhouse rising from the ground just outside the R. Joe Dennis Learning Center. It is the most visible evidence of the new Sustainability Learning Lab that is being developed in phases over three years. The Sustainability Learning Lab LibGuide is documenting its progress while also supporting it by gathering together into one place related resources of all kinds.

END_OF_DOCUMENT_TOKEN_TO_BE_REPLACED 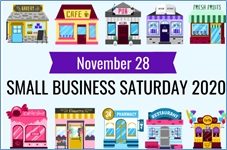 Small Business Saturday, the Saturday after Thanksgiving, is sandwiched between Black Friday and Cyber Monday, days of frenzied shopping mostly at the big retailers. The hustle and bustle of these impersonal transactions is a stark contrast to the quieter more customer focused neighborhood shops. This year marks the 10th anniversary of Small Business Saturday, which was started by American Express in 2010. The goal was to encourage people to “shop small” and spend more of their dollars at local businesses. The Small Business Administration, which helps Americans start, build, and grow their businesses, became a co-sponsor in 2015. People have embraced and supported this day, spending a record $17.8 billion in 2018, but this year small businesses need your support more than ever.