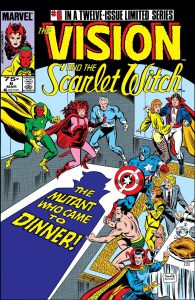 The Mutant Who Came to Dinner.  The Gentleman’s Name is Magneto!

Synopsis of “No Strings Attached!”

It is Thanksgiving Day 1985 in New Jersey and a small space craft appears out of the sky and lands near the home of Vision and the Scarlet Witch (Wanda Maximoff).  Two adults and a small child appear at their front door.  Vision opens the door and welcomes Quicksilver (Pietro Maximoff), his wife Crystal, and their young daughter Luna to Thanksgiving Dinner. The guest list includes the active-duty Avengers: Captain America, Namor the Submariner, and Wasp.  Also in attendance is Dr. Strange, who is watching Wanda during her pregnancy.  Further guests include: Illusion, Glamor, Norman Webster, and Martha Williams.

Everyone is having a delightful time until the final guest arrives: Magneto.  The master of magnetism enters in casual clothes and announces himself by saying “Good afternoon, everyone…men call me Magneto.”  Magneto was invited because he is the father of Pietro and Wanda, and Wanda had recently informed Magneto that she was pregnant.  Magneto has spent the last few years reforming himself.  When Charles Xavier was almost killed he had to join his love Lilandra, Empress of the Shi’ar Empire, in outer space to receive healing based on advanced Shi’ar medical technology, he chose Magneto to be the new headmaster of the New Mutants in his stead.  The New Mutants had chosen to spend the holidays with the young super hero team, the Power Pack.  Wanda also believed Magneto had every right to see his granddaughter Luna.

To many of the superheroes at this festive event, memories of their run ins with the former leader of the Brother of Evil Mutants rang clear in their minds.  Regardless, the dinner goes well and is relatively pleasant.

After the dinner, Magneto asks to speak with Wanda. He attempts to explain why he became Magneto and ask for her forgiveness for the way he treated her and her brother in the past.  Wanda rebukes him harshly and declares the he will have to do a lot more than beg for her forgiveness.  At the same moment, Holly LaDonna knocks on the door wanting a magic lesson from Wanda.  Magneto uses this moment to quietly storm off.

In the backyard, Magneto notices something alarming which convinces him to return inside.  Magneto gathers Vision and Pietro outside where they are greeted by copies of the original Brotherhood of Evil Mutants: Magneto, Mastermind, Toad, Quicksilver, but minus the Scarlet Witch.  At first the trio believe that Mastermind is behind the event but when Vision scans Toad he tells Magneto to pull the blood out of Toad’s brain.  This act knocks Toad out and sees the other copies collapse as well.  Toad was using the technology of the Stranger to work out his anger for his unrequited feelings for Wanda.  Toad has a get away spaceship with a force field to protect him.  Prepared to his escape with his robotic Brotherhood of Evil Mutants, Toad’s Quicksilver punches him out.  Pietro had used his super speed to change costumes with his robotic duplicate.

With the fight over, Vision tells Magneto that this might be the good deed he needs to perform to get Wanda’s trust. Magneto declines and asks Vision and Pietro to not bring up this encounter with Wanda, he does not want it to seem that he did something just for her approval.  Magneto states “I have sworn a new vow—to gain the world’s acceptance!  Let my conduct there earn my daughter’s respect—and my son’s!  And now excuse me!  Tell Wanda she prepared an Excellent Thanksgiving!”