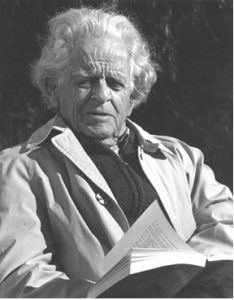 Renown for his writings on Native American culture and his poetry of the plains, John G. Neihardt holds the honor of being Nebraska’s first Poet Laureate and maintains this title in perpetuity. Born in 1881 in Illinois, he lived briefly in Kansas, residing in a sod house before moving to Kansas City, then Wayne, Nebraska in 1891.  From an early age, Neihardt felt a spiritual connection to nature, including the Missouri River and the rolling plains of Nebraska. These seemingly endless spaces gave him a numinous sense of the infinite and at age 12 he had a transcendental experience while in a fever dream that led him to choose his future as a poet.

At thirteen Neihardt enrolled in Nebraska Normal College, later to become Wayne State College, graduating at fifteen with a teaching degree and a Bachelor’s of science at sixteen. After a brief stint as a teacher in a country schoolhouse, he and his family moved to Bancroft, where he became part owner and editor of the local newspaper, the Bancroft Blade. He also worked as a trader on the Omaha Reservation, an experience that gave him his first look into the Native American world. He gained the respect and trust of the tribes he worked with and was allowed to hear their stories and learn about their way of life. At nineteen he published his first poem, The Divine Enchantment, which deals with Hindu and Christian religions.

His relationship with the Omaha tribe led to contact with others, including the Winnebago and the Sioux, to whom he traveled to learn their customs and traditions first-hand. In 1932 he published his most famous work, Black Elk Speaks, a narrative of Oglala holy man, Black Elk, based on direct conversations between the two. Black Elk, a survivor of the Battle of Little Big Horn and the Wounded Knee Massacre, told his life story and native customs to Neihardt, using his son as translator, and became very close with Neihardt and his family who had also joined him on his journey, even giving them Lakota names, Neihardt’s being “Flaming Rainbow.”

During his life, Neihardt moved to various locales throughout the Midwest, including Minneapolis and St. Louis, where he worked for local newspapers and a teacher at universities while continuing to write poetry and books on Native American culture. In 1908 he married his wife Mona after a correspondence initiated by her after reading a book of his poetry, meeting for the first time the day before their wedding, and eventually having four children. Over the course of almost thirty years, Neihardt wrote what would be his magnum opus, Cycle of the West, a series of epic poems about westward expansion and military campaigns against Native peoples involving real characters mixed with fictional stories. This work would earn him the nickname “American Homer.”

Through his poetry, biographies, and teaching career, Neihardt worked passionately to preserve and share the culture and lifestyles of Native Americans. His work captures the beauty and freedom of the west while honoring the Natives who lived there through the documenting of traditions and honest discussion of the traumas they suffered as a result of westward expansion. His books have been translated into many languages and are widely read throughout the world.

Several of Neihardt’s works are available at Bellevue University Library, located in the general collection. All books can be borrowed for 21 days with the option of renewal.