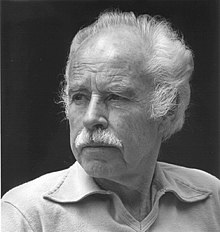 Perhaps Nebraska’s most overlooked author, Wright Morris is also one of its most decorated, having won two National Book Awards, three Guggenheim Fellowships, and the Mari Sandoz Award for “significant, enduring contribution to the Nebraska book world.” Born in Central City, Nebraska in 1910, Morris lived in Schuyler, Kearney, and other towns along the Platte before moving to Omaha. He spent summers on his uncle’s farm in Norfolk and moved to Chicago when he was fourteen. His mother died shortly after his birth and his father was a wanderer, leaving him in the care of neighbors and family.

Morris adopted his father’s nomadic lifestyle, living in California, Italy, Germany, France, Ohio, Massachusetts, and Brooklyn by the time he was thirty-one. Despite his early departure from the Great Plains, he constantly returned to it, sometimes in person to visit, but more often in his fiction. He has written that his formative childhood in Nebraska shaped the way he saw the world and what he chose to write about – “where there is almost nothing to see, there man sees the most.”

Much like Mari Sandoz and Tillie Olsen, Wright Morris explores the disparity between the promise of the Great Plains for settlers and the harsh reality of existence there. Morris carries this theme with his to all aspects of American life, exploring it as a land of paradoxical great wealth and immense poverty, both economic and spiritual. Morris presents these notions though simple descriptions and colloquial speech mixed with more modern stream of consciousness prose.

This striking blend of classical and more innovative forms of literature is best seen in his photo-texts that combine narrative and photographs, creating an experience that is so simple it borders on the abstract. With sparse narrative, the works are based more on feeling and open to interpretation, much like abstract art.

Like Morris himself, his novels travel the world, giving them an autobiographical flavor always from a distinctly American point of view. His novel The Field of Vision, awarded the National Book award in 1957, tells the story of a group of Nebraskans in Mexico City at a bull fight. Also awarded the National Book award in 1981, his novel Plains Song: For Female Voices traces three generations of a Nebraska farm family. It was his last novel. In his career, Morris wrote over thirty books including novels, short stories, autobiographies, and photo-texts.

Several of Morris’ works are available at Bellevue University Library, located in the general collection. All books can be borrowed for 21 days with the option of renewal.