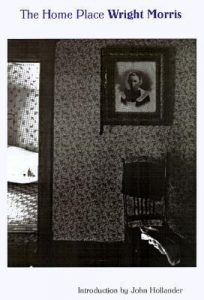 Returning to a place we inhabited as a child can present many emotions – nostalgia, joy, sorrow – but more than anything it shows us the constant way things change, not only the place we visit, but ourselves as well. Wright Morris’ The Home Place tells the story of one day in the life of a loosely fictionalized version of the author as he returns to his family farm with his wife and children from New York City, hoping to escape their cramped city apartment for wide open plains. The narrator, Spud Muncy, tries to paint a picture of the verdant and prosperous farm as he knew it as a child to his city-dwelling family, but the dry, barren landscape that meets them resembles nothing of his past.

Spud has an identity crisis as he is faced with the differences between city and country life as well as the changes that have occurred since he left the farm. His uncle is adamant about the family name being carried on, and although Spud’s children have the name, they do not have the country life in them that is necessary to be a Muncy in his eyes. He struggles telling his children and wife about the land he once knew, and admits to the way words fall short in conveying experience and emotion. This struggle seems to form a basis for the photographs that comprise nearly every other page. Morris sees the advantage of photographs in telling a story, even if they often do not match the narrative they are the counterpoint to.

Morris’ photographs of his actual family’s farm are slice-of-life works of art that give the reader a greater sense of place on the bleak farm and the countryside. Black and white and filled with dramatic shadows, they give form to the bright and dark aspects of life on the plains, and illuminate the gradations of memory compared to reality. All but a few photos are devoid of people. Instead Morris aims his camera at buildings that inform the setting of the narrative, at found farm implements that display the vast landscape in the background, but most often at close-up images of seemingly abandoned items lying around the area – a shaving kit, a lone rocking chair, a pair of frayed jackets, or a bucket of stripped corn cobs. These unpopulated pictures give a sense of the desolate life on a drought-stricken farm with rich textures that say more than a thousand words could.

These images tend to seem antiquated and outmoded when viewed through Spud’s eyes as he tries to explain how the modern world works to his old aunt and uncle who seem stubborn in their refusal to change, but from their point of view they are all the more precious for their simplicity, getting the job done without the complications of newer inventions. As Spud tries to explain how things work on the farm, his aunt and uncle claim he makes things seem too complicated. For them his children understand the simplicity of life even if they ask questions. It seems these questions are a product of growing up in a complicated city, whereas things in the country are so simple as to be self-explanatory. This contrast comes across in the terse language of Spud’s aunt and uncle compared to his own verbosity.

By the end of the day, Spud comes to see the beauty of the simple worn-out items of his family, and how words fall short of expressing this spiritual insight. The Home Place is a meditation on the passage of time, the remembrance of childhood, and the value of permanence in our rapidly changing world.

The Home Place is available at Bellevue University Library, located in the general collection. All books can be borrowed for 21 days with the option of renewal.