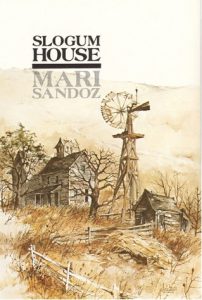 The Western frontier is often portrayed as a landscape dominated by men – stoic, lone cowboys like John Wayne or heartless criminals like Jesse James. But in Mari Sandoz’s novel Slogum House, the roles are reversed in the figures of Gulla and Ruedy Slogum, a land-hungry proprietress of a boarding house and her husband who would rather spend time gardening. The novel centers around Libby, daughter of Gulla and Ruedy, who possesses her mother’s hardheadedness and her father’s aloofness. Sandoz explores the complex family dynamic in a drama fit for Dallas or Game of Thrones. Gulla comes from a poorer family, marrying Ruedy in order to raise her position in life. When his family shuts them out due to her low station, Gulla vows to become successful just to spite them, especially his sisters.

Guided by the fortunes she reads from a deck of playing cards, Gulla takes her family Westward in search of wealth with meek Ruedy and the kids dragged along. They end up in the sandhills of Western Nebraska in the Niobrara River valley, where the only land available is free because of the inability to grow anything. But Gulla takes heart in the omens of the cards and begins staking out tracts of land, often through illegal means. She has her sons steal posts to fence off their ever-widening acreage, take over others’ land, rebrand stray cattle, even remove a church, all in the cover of night, keeping the locals quiet through intimidation. Meanwhile Ruedy has found the only land that will produce any crops, a small muddy patch near a stream that he cultivates into a garden through hard work.

It seems nothing will stop Gulla from her desire for more, symbolized by the map on her wall with a wide red circle she plans to take, eventually building extra rooms in their house for ranchers passing through complete with secret passages for her to spy on all activities and a few extra girls to entertain the men. Everything in the house is done according to her wish, even going so far as to use her daughters to gain favor with local officials. Ruedy turns a blind eye to these goings-on, preferring to stay out on the prairie, tending his field or relaxing in nature. Gulla scorns him for what she sees as laziness, only putting up with him as long as he does not interfere in her enterprises.

Gulla is both enterprising and cruel, character traits that give her advantage in the harsh, arid West. Ruedy comes off as content and carefree, perhaps to a fault. These complicated characters play out in Libby, who goes along with her mother’s plans up to a point. Refusing to be handed over to men, she works in the kitchen at night and spends her days outside keeping an eye out for neighbors encroaching to demand their land back. She is the only child who can stand up to her mother, who treats her much like her husband, granting her her independence as long as she does not cause too much trouble. But trouble finds them as disgruntled neighbors are gathering against the family for their crimes. More trouble comes from within the family, as Gulla’s abuse affects her children and hired help in turn. Her truculence and greed end up alienating all around her, making her family a double-edged sword – she needs them to carry out her plans, but her domineering becomes too much for them, causing them to turn away from her.

Filled with family drama contrasted with beautiful descriptions of the scenic sandhills, Mari Sandoz’s Slogum House captures both the dark and light sides of frontier life in Western Nebraska.

Slogum House is available at Bellevue University Library, located in the general collection. All books can be borrowed for 21 days with the option of renewal.