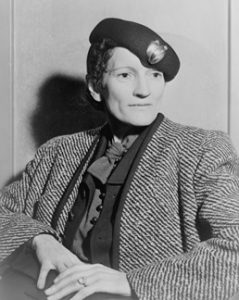 Known for her harshly accurate portrayals of Nebraska life on the plains and in the city in the early twentieth century, Mari Sandoz is one of the state’s most cherished authors. Born in 1896 near Hay Springs in northwestern Nebraska, she used her experience on the family farm to inform her early works. Under her domineering father, Mari’s schooling and writing ambitions were neglected in favor of working on the farm and helping to raise her siblings. Despite never attending high school she was able to receive a rural teaching certificate. After a brief, turbulent marriage, she enrolled in the University of Nebraska in 1922 as a special adult student and began writing short stories for contests and newspapers.

Her first major work of fiction was a biography of her father, described as a violent drunk while being a pioneering homesteader and farmer. Sandoz’s grim depictions of him in the home are contrasted with his work in helping settlers turn the plains into a viable place to live and raise families. This theme is often seen in her work, where the harsh natural world and intense effort necessary to transform the land often have negative effects on those living there. Her biography Old Jules was rejected by publishers for years before winning a prize for non-fiction by the Atlantic Monthly magazine.

Sandoz often wrote about marginalized people, emphasizing the role of women on the plains, advocating for the Native Americans of the lands, and documenting the way animal life had been abused in the process of westward expansion. Her brutally frank writings on the darker side of the American dream brought ire from Nebraska natives. Though she wrote about places pseudonymously, her thinly veiled descriptions of rural and city life were banned from libraries and she received hate mail and threats for her honesty. Where most authors of the time wrote romantically about the Old West, many saw her realism as betraying this high ideal.

Falling somewhere between fiction and documentary, Sandoz wrote in a plain style that captured the manners and customs of Nebraska while it was still being formed. Many refer to her as a historian as well as a novelist for her accurate and highly-studied approach to her subjects. In addition to her biography of her father, she is most known for her biography Crazy Horse: the Strange Man of the Oglalas about the well-known Lakota leader. To get information for her book, Sandoz camped near the reservations and interviewed members of the tribe. She was ahead of her time in the way she presented the tribe and man from the perspective of the tribe, replicating Lakota speech-patterns and metaphors to capture their way of life.

Throughout her life, Mari Sandoz spread her passion for writing by encouraging the next generations through teaching, lecturing, and holding workshops. In 1950 she received an honorary Doctorate from the University of Nebraska. After her death in 1966 she was inducted into the Nebraska Hall of Fame and the Hall of Great Westerners of the National Cowboy & Western Heritage Museum.

Several of Sandoz’s works are available at Bellevue University Library, located in the general collection. All books can be borrowed for 21 days with the option of renewal.