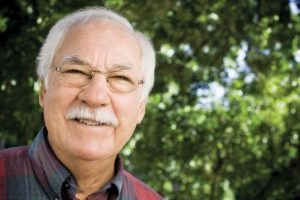 State Poet of Nebraska from 1982-2013, William Kloefkorn captures the small towns and wide plains of the Midwest in his sparse, precise style of poetry. Born in Kansas in 1932 outside the town of Attica, Kloefkorn enjoyed a childhood freely roaming the prairies, skinny-dipping and fishing for turtles, and hopping train cars for a quick ride. He worked on his grandparents’ dairy farm milking cows and gathering eggs, as well as delivering papers in town for movie tickets. This idyllic childhood was contrasted with grim accidents that left his father disabled and the family house burned to the ground. Both the hardships and pleasures of farm life and the open plains influenced Bill as a young man and remained themes he would return to throughout his career.

In 1950 he attended Emporia State College, majoring in English. After college he joined the Marine Corps, becoming a lieutenant training an anti-tank assault platoon. In 1958 he began teaching English at Wichita State University before moving to Nebraska Wesleyan in 1962 where he remained until retiring in 1999. While teaching, Kloefkorn drew upon the experience for some poetry, but still remained attached to the wilderness of the Great Plains – his most enduring source of inspiration. He spent time at a cabin on the Platte River, traveling up the Mississippi on a steamer, exploring the empty highways and sandhills of the West, and floating on the Loup Tributary. He writes about these places and wildlife using the simple scenes as symbols for the circle of life. Through his poetry we see how language can help connect us to the earth, revealing lessons of nature about life, death, and the constant beauty that surrounds us if only we take the time to look.

Kloefkorn’s poetry is also intimately connected with the small towns of the Midwest, filled with familiar brand names and colloquial, sometimes vulgar, sayings of the common folk. Much like the simple landscape he describes, these seemingly dull towns are full of drama that, while maybe not as exciting as the big city, are portrayals of the human condition which are all the more effective for their simplicity. Like all good works of art, Kloefkorn’s poems begin with the individual, whether it is a small town character or a pleasant view from a hill, but expand to the universal, causing us to rethink our meaning in the world and the meaning of life itself.

William Kloefkorn has written over fifteen works of poetry, four memoirs, and two works of fiction in his career. He passed away in 2011.

Several of Kloefkorn’s works are available at Bellevue University Library, located in the general collection. All books can be borrowed for 21 days with the option of renewal.