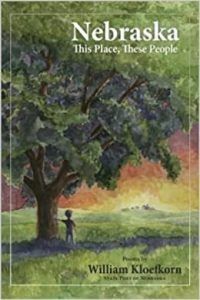 Nebraska: This Place, These People is a collection of over eighty poems by former Nebraska State Poet, William Kloefkorn, about the state he is most identified with. As the subtitle indicates, these poems focus on the landscapes and residents of Nebraska, in intimate descriptions, which ultimately lead to bigger questions through Kloefkorn’s musings.

In “Camping on the North Bank of the Platte,” (72) Kloefkorn uses a scene of young people wading in the river to soliloquize on the easy love and joy of innocent youth, unsurprised by sudden storms in their tents and their “absence of guile.” The juxtaposition of nature and youth causes him to question “who was the first / to permit the dream its entrance / into the lizard’s brain?” Without an answer he concludes about the magic of youth “In our own sweet partial ways / we are immortal.”

With “Corn” (66-67) he examines the somber side of nature with its refrain “The corn will die.” This phrase becomes a mantra of sorts that helps ease the sorrow when the corn inevitably dies. The poem is an ode to the sustaining rain that is necessary for life, which becomes a symbol for the necessity of a connection between humans and the greater forces of life, or “whatever it is / the dumb dependent calls the heavens.” Again Kloefkorn uses simple Midwestern images of corn and rain to paint a picture that encompasses life, death, and all of reality.

Kloefkorn’s themes of nature often reflect those of fellow Nebraskan Loren Eiseley. His poem “That Voice from a Brain Evolved to Dream” (56-57) is dedicated to Eiseley. The poem tells a story of William and his brother crawling into a cave as children, where the subterranean space evokes ideas about evolution. The cave inspires jaw-dropping awe compared to “those first two carp / who amazed themselves by journeying just one step more / beyond that other step they took how many miles ago / away from water.” The ancient feeling of the cave reduces the boys to pre-evolved forms, where speech is in single syllables. Upon leaving the cave they stretch like lizards finding their legs in the sun and look up to see a bird, embodying the progress of evolution. Ultimately Kloefkorn recognizes the most human part our evolution – our ability to dream, from which evolved our ability to speak.

In another homage to the Platte, entitled “Boundaries” (40), Kloefkorn gives us images of the river frozen yet flowing in winter and thawing in early summer. His efforts to control the river with pilings and fences are forgotten when he rests on Sunday and he is able once more to hear the river. As a note on humanity’s attempts to control nature he reminds us “when the eye of the flesh goes shut / O pioneer / the eye of the spirit opens.”

“No Longer Believing in Wind” (113) is an elegy focusing on the nature of wind. “From the airborne dust we learn alliances” he begins, going on to relate all human endeavor to mere breezes. “Our flights are fancies / no more enduring than the movements / of small wings.” Even though we may have escaped the instincts of animals, we are still inevitably connected to the planet. Our aspirations and actions are like wild winds, but ultimately we become grounded, reconnected at our deaths “in league with the center of the earth.”

Written in free verse and in an easy spoken tone, Kloefkorn’s poems resemble the open plains and simple folk that make up Nebraska’s wilderness and small towns. Revolving around images of nature, he transforms these everyday sights into deep thoughts on the mysteries of life. After reading William Kloefkorn, it becomes impossible to take in the Great Plains or rivers of Nebraska in the same way.

Nebraska: This Place, These People is available at Bellevue University Library, located in the general collection. All books can be borrowed for 21 days with the option of renewal.