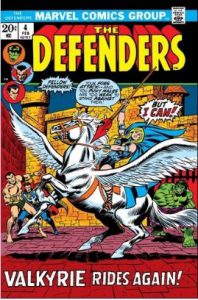 1st Appearance: The Defenders #4, November 1972 (Appeared as a guise for Amora the Enchantress in The Avengers #83, December 1970)

Profession: Leader of the Valkyrior, Chooser of the Slain, Shield-Maiden, Super Heroine

In the previous issue, Hulk believed he saw Dr. Strange harm Barbara Norriss, and at the beginning of this issue, Hulk jumps to a neighboring castle to avoid the master of the mystic arts.  Then, Namor the Submariner and the prince of Atlantis, Strange and the others are teleported to a mystical realm.  Once there, both Strange and Namor are overwhelmed by the Executioner and his army.

Hulk, who has transformed into Bruce Banner, finds himself in a cell with Barbara. The pair notice that a nearby cell is holding Amora, the Enchantress, and the Black Knight.  The Enchantress explains that after last encounter with the Avengers, she and the Executioner travelled to this realm. Much to her displeasure, the Executioner quickly became the consort of Queen Casiolena.  Seeking revenge on the monarch, the Enchantress did what her name implies and enchanted the Black Knight into helping her, but both were defeated and now find themselves in a prison cell.