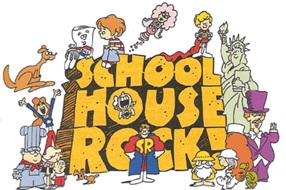 Schoolhouse Rock! was the brain child of David McCall who noticed that his young child was struggling with his times tables but could easily memorize songs on the radio. McCall called up his friend Bob Dorough to write a song that could teach multiplication. Bob wrote “Three is a Magic Number” and it became the first Schoolhouse song. Tom Yohe, an illustrator, heard the song and was inspired to draw visuals to accompany the whimsical song.

The song and visuals were presented to the television network ABC and they decided to order a song for all numbers (besides 1’s and 10’s). Multiplication Rock premiered in the Saturday morning cartoon line-up in January 1973. Despite it being called “rock”, the catalog of songs also features jazz, classical-style music, and folksy themes. Fun fact: “Figure 8” was the most popular song from the original Multiplication run and album.

Due to the high ratings and popularity, ABC ordered more topics. In 1973, Grammar Rock began featuring the use of interjections, conjunctions, nouns, and verbs. To celebrate America’s bicentennial, America Rock ran from 1975 to 1976. This set features songs about westward expansion, revolutionary war, and the fan favorite “I’m Just a Bill”. Science Rock was the fourth series and it taught about bones, water, and gravity.

Schoolhouse Rock! had a resurgence in the 90’s when ABC aired it on its Disney-provided Saturday morning cartoon block. Two new songs were added to Grammar Rock: “Busy Propositions” and “The Tale of Mr. Morton”. What really put it back in the public eye, though, was the release of the 30th anniversary DVD, which had all the songs, interactive games, and rare content.

An obscure part of Schoolhouse Rock! was Scooter Computer and Mr. Chips, a series of just 4 music videos to talk about home computers which was becoming more or less normal in the 1980’s. However, due to how rapidly computers changed during that time, it became outdated very quickly. Watch for yourself here.

Schoolhouse Rock! albums were sold on records, tapes, and CDs to make sure these songs never left young people’s minds. Many of teachers and parents rejoiced when the videos released on VHS tapes and later, DVDs. This is probably how you were introduced to it. Personally, my mother forced me and my brother to watch these a lot when we were learning our times table in the 3rd grade.

What are your favorite Schoolhouse Rock! songs? Here are some of mine:

“The Shot Heard ‘Round the World”