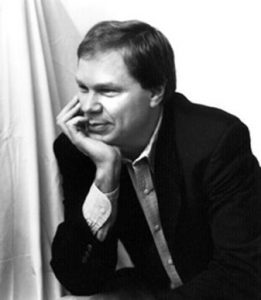 Richard Dooling is an author, screenwriter, professor, and lawyer from Omaha, Nebraska. Born in 1954, he attended Creighton Prep High School and he received his B.A. from St. Louis University. Shortly after studying at UNMC, he began working as a respirational therapist in an intensive care unit in Clarkson Hospital. Returning from a year-long journey through Europe and Africa, Dooling enrolled in St. Louis University to receive his law degree. While there he was the editor in chief of their law journal.

In 1992 he published his first novel, Critical Care, drawing on his experiences in the ICU. The novel focuses on the themes of death and love as the main character working to keep his patients alive sparks up a romance with a patients’ daughter. In 1997 the novel was optioned into a film directed by Sidney Lumet and starring James Spader and Kyra Sedgwick.

His second novel, White Man’s Grave, published in 1994, follows a bankruptcy lawyer searching for his friend who has gone missing in Africa while working with the Peace Corps. Again, his personal experiences in Africa and as a lawyer inspired his writing. His next novels, Brain Storm, published in 1998, and Bet Your Life, published in 2002, center around law professionals who encounter the intersections of science and death.

In 2004 Dooling teamed up with horror and science fiction writer Stephen King to co-write and co-produce the ABC miniseries Stephen King’s Kingdom Hospital. This collaboration led Dooling to publish a novel pseudonymously written by the fictional character from the series Eleanor Druse. In addition to his fictional work, Dooling has written nonfiction works on the first amendment and artificial intelligence.

Dooling’s fiction is known for its ironic tone and use of black humor. Throughout his career he has worked in hospitals, law firms, and as a writer. He was a finalist for the National Book Award in 1994 and has been a visiting professor at UNL. His work has been influenced by his various careers and his love of travel – a theme that will be explored in his novel-in-progress Northwest Passage.

Several of Dooling’s works are available at Bellevue University Library, located in the general collection. All books can be borrowed for 21 days with the option of renewal.