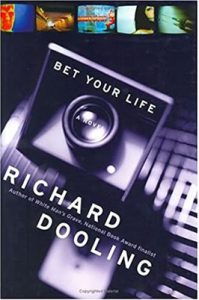 Set in Omaha, “the insurance capital of the Midwest,” Richard Dooling’s Bet Your Life follows insurance fraud investigator Carver Hartnett as he attempts to solve the sudden death of his friend and coworker, Lenny, after a wild night out and a mysterious online gaming session. He is aided in his search by another coworker, and unrequited love interest, Miranda. As they uncover the secrets of Lenny’s life, a macabre tale is revealed involving drug abuse, insurance fraud, and clandestine emails, with Miranda possibly playing a large role.

Taking place in the first years of the twenty-first century, the novel examines the changing technological landscape and shifting balance and conflation of data and intuition, fact and emotion, both in the insurance industry and personal relationships. The depleted fraud investigator unit no longer snoops like detectives, but rather uses computers to find scammers, or more often letting them get away with it due to lack of resources, passing the bill onto policy holders with higher premiums. The internet has created a new space with increasing anonymity among acquaintances, with hidden identities and ulterior motives. With scenes reminiscent of Do Androids Dream of Electric Sheep? and Double Indemnity, Dooling unravels a techno-noir mystery set in the seemingly innocent city of Omaha, just across the river from the casinos and all-night clubs of Council Bluffs.

This emerging world of technology is contrasted with the esoteric realm of religion. Carver is a lapsed Catholic who trusts the preciseness of facts over the uncertainty of faith. Miranda is an ardent believer. This leads to a conflict between them that threatens to keep them apart, while the trauma of Lenny’s death brings them together.

As Carver delves into the seedy underworld of the insurance business, he is constantly surprised by the motives of people he thought he knew well. Was Lenny engaged in serious insurance fraud even while investigating similar cases? Were Lenny and Miranda in a secret relationship? How much do the police and FBI know and how much will Carver allow himself to be used by them to solve his friend’s murder?

Fast-paced, darkly humorous, and smartly written with insights into the workings of the insurance industry and ultimately the inner workings of humans, Dooling discusses the nature of deceit, belief, and the mysteries of those we think we know best. Featuring references to Omaha locales such as Gorats, La Casa, and Hummel Park, this novel will feel familiar to residents of the Heartland, Midlands, “Mid-Heartland” or any other name you choose to call it.

Bet Your Life is available at Bellevue University Library, located in the general collection. All books can be borrowed for 21 days with the option of renewal.