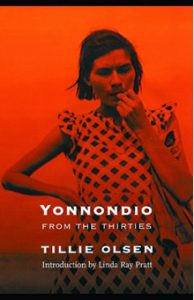 In Yonnondio: From the Thirties, Tillie Olsen traces the life and growth of the Holbrook family and their struggles for a better life in the Midwest in the early twentieth century. Beginning in a Wyoming mining town and eventually ending in the streets of Omaha, the family’s quest for the American dream is thwarted by the harsh realities of the working class. Focusing on the daughter, Mazie, the reader gains a view into the conflict between the poor conditions of early industrialism and the desire for identity and independence from “the Company” – the ubiquitous forces of capitalism that hold the family down.

The initial chapters are set in a Wyoming mining town, where the constant fear of death hangs over the landscape, captured in the steam whistle that cries out when disaster strikes. The earth is personified as an evil force that claims men’s lives, dirty coal black opposed to the pristine white possessions of the bosses. The poor working conditions instill fear and alternating anger and remorse in the parents, Jim and Anna, which is unleashed in fits of drunkenness and violence upon the children.

It is in this unhappy world that Mazie begins to form an identity, driven largely by Anna’s desire that she become educated in order to avoid the hard labor her parents are forced to endure. Even with the limited education she has received, Mazie takes pride in her knowledge. After Mazie and Jim have near-death experiences, Mazie at the hands of a man driven insane by a mine explosion and Jim in a cave-in, the family vows to leave the life of hardship working in the black bowels of the mines and move to a farm where greenery and life abound.

Despite the improved surroundings, upon reaching their new home in South Dakota, Jim is immediately warned of the new hardships awaiting him, the ever-present forces of capitalism now found in the disadvantages of share-cropping where tenant farmers work for land-owners. During the summer life is vastly better than the mining town, as the children attend school and learn to read while also connecting with the nature around them. Crops are raised, bountiful meals eaten, and a dance is even held in their barn, a culmination of joy that exists on the open plains. But as autumn comes, Jim learns he actually owes the land-owners after working to produce for them. This situation causes Jim to revert to his old violent ways as he begins drinking again.

Around this time Mazie has a conversation with a dying neighbor who had taught her about the stars. He tells her to keep learning and never lose her wonder at life. He also warns against the insidious forces of life that must be rebelled against, namely the bosses that act to keep the working class in their place. Nature also seems to be against them as a harsh winter forces them to remain inside huddled around their stove. What was previously a land of life now becomes a dark place of cold death. After Anna gives birth to their fourth child, Jim decides to move the family to Omaha, dejected by the lack of improvement on the farm, hoping to find work in the slaughterhouses.

Olsen displays Omaha in the 1930s as a congested city overpowered by the stench of packinghouses and landfills. While Jim, who has found work in the sewers after being turned away from the packers, tries to find the lighter side of things, showing off the new electrical lighting in the house and boasting of the meager patch of yard, the rest of the family is crushed by their new surroundings. The narrative shifts from a traditional storytelling to a crowded stream-of-consciousness that displays Mazie’s overwhelmed state of mind. She yearns for the natural setting of the farm in summer, contrasted with the man-made structures and stenches of the city. While Mazie is forced to play in the dump, imagining better, more luxuriant lives taken from films, her father goes to work in the packinghouse, painfully detailed in scenes of inhumane working conditions.

Throughout the novel we see Mazie’s growth into what will eventually become someone resembling her author, Olsen. Despite the bleak circumstances, Mazie always focuses on the sounds and colors of the world around her, both natural and man-made, displaying her artistic wonder and poetic ability to find something valuable in the worst situations.

Although the novel is unfinished, Mazie’s experiences with the forces of capitalism point to a future of political activism like Olsen, who advocated for improved labor situations in Socialist and Feminist organizations throughout her life.

Yonnondio: From the Thirties is available at Bellevue University Library, located in the general collection. All books can be borrowed for 21 days with the option of renewal.

Source: Yonnondio: From the Thirties by Tillie Olsen, 2004, published by University of Nebraska Press