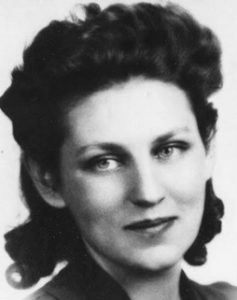 Nebraska is a place of open country and congested city, farmland and factory, and no author better captures the joys and hardships of these conflicting dynamics than Tillie Olsen. Born Tillie Lerner in 1913 or 1914 in either Wahoo, Mead, or Omaha (no birth certificate exists), to Russian immigrants, she learned at an early age the hard facts of poverty both in the country and the city. Her family relocated to Omaha where she attended Lake School Elementary in North Omaha and Omaha Central High School.

Her father Samuel worked several jobs including farmer, packing-house worker, painter, and paperhanger. He and his wife Ida had left Russia after the failed 1905 rebellion, in which socialist workers, immigrants, and college students attempted to overthrow the Tsarist dictatorship in favor of a government that supported the working class. Samuel maintained these beliefs in America, eventually becoming State Secretary of the Nebraska Socialist Party. His socialist work and the terrible conditions of the Great Depression instilled in Tillie the urge to advocate for the advancement of the working class as well as the position of women in society.

When the Great Depression struck the nation, Tillie was forced to leave school to help support her family. Undeterred, she continued educating herself by reading; “public libraries were my colleges.” Through literature she was able to expand her experiences to broaden her understanding of the human condition. Tillie combined her activities in organizations supporting worker’s rights with her passion for literature by writing about the plight of the struggling working class, portraying the people who served as the underrepresented and often unnoticed backbone of capitalism through stories and poems, most notably her unfinished novel Yonnondio: from the Thirties which reflects her early life in the rural Midwest and urban Omaha.

As a member of the Young Communist League, Tillie was jailed for helping organize packinghouse workers in Kansas City during the Depression. When the Spanish Civil War broke out between socialists and monarchists, she protested against the war. By this time she had married John Olsen and started a family in San Francisco. With her continued dedication to the labor movement and her new familial responsibilities she found very little time for writing. She was forced to set aside her novel Yonnondio, which would not be published until 1974.

Only after her children had grown did she begin to write again, publishing a collection of short stories entitled Tell Me a Riddle in 1961. She chose to leave her novel Yonnondio unfinished to preserve the voice of youth employed by the main character, a fictional version of Olsen herself. Her last book, Silences, was published in 1978. It is a collection of essays, thoughts, and quotations that speak to the obstacles that silence potential artists – most notably being a woman and poverty.

While her work expounds on the harsh circumstances of life that may deter writers and artists such as herself, she never gave up hope that situations can be improved – a theme that is imbued in her characters. A staunch feminist and socialist, she worked her whole life, both in her writing and on the streets, to help give a voice to those who are silenced.

Several of Olsen’s works are available at Bellevue University Library, located in the general collection. All books can be borrowed for 21 days with the option of renewal.