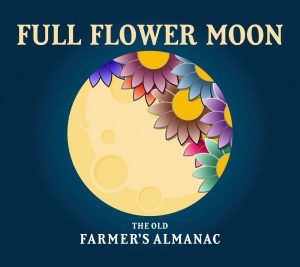 Get ready for some night time action this month!  May has two lunar occurances happening at about the same time.  A full moon will happen in the middle of the month.  A lunar eclipse will also take place at the same time.

May’s full Moon reaches its peak on May 15-16, 2022! Plus, this full Moon will coincide with a total lunar eclipse for most of North America. Here’s everything you should know about this month’s full Moon, including how it came to be called the “Flower Moon.”

May’s full Flower Moon reaches peak illumination at 12:15 A.M. (EDT) on Monday, May 16. This means that it will reach its peak on the night of Sunday, May 15, in more western time zones.  Venture outdoors on the night of the 15th to get the best view of the bright full Flower Moon! Find a location with unobstructed views of the horizon, if possible. See what time the Moon will be visible in your area with this Moonrise and Moonset Calculator.

Why Is It Called the Flower Moon?

The full Moon names used by The Old Farmer’s Almanac come from a number of places, including Native American, Colonial American, and European sources. Traditionally, each full Moon name was applied to the entire lunar month in which it occurred, not solely to the full Moon.

May’s Flower Moon name should be no surprise; flowers spring forth across North America in abundance this month!

May’s Moon names tend to speak to the arrival of spring and all that it entails.  The Cree names Budding Moon and Leaf Budding Moon celebrate the awakening of local flora, which really begin to leaf out now in many areas. Similarly, Planting Moon (Dakota, Lakota) marks the time when seeds should be started for the farming season ahead.

The activities of animals marked spring’s arrival, too, which is highlighted by the Cree names Egg Laying Moon and Frog Moon, as well as the Oglala term Moon of the Shedding Ponies. All three names indicate that warmer weather is on the way! 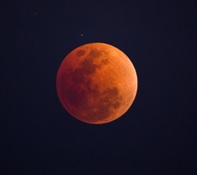 This total lunar eclipse occurs in the late night hours of May 15 into May 16 and will be visible for stargazers in most of North America, all of South America, Western Africa, and parts of Western Europe. From the Pacific Northwest into British Columbia, as well as in southern Alaska, a partial lunar eclipse will be be visible.

When Is the Eclipse?

This eclipse begins on the night of Sunday, May 15, and ends on Monday, May 16. Times are given below for Eastern and Pacific time zones; use these to calculate the timing of the eclipse in your own time zone.