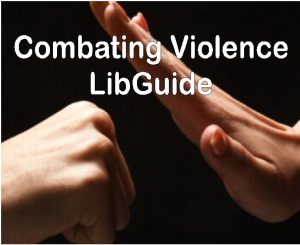 Violence seems to be constantly in the news lately. The Combating Violence LibGuide has combined previous LibGuides on Gun Control and School Violence. There are five topics covered, which are: guns in America, school violence, racially motivated violence, violence against women, and violence against LGBTQ+.

Guns in America covers gun ownership and culture in America. School Violence encompasses bullying: physical, psychological, sexual, and carrying weapons in school. Racially Motivated Violence relates to lynchings, church arson, mass shootings, disturbances, riots, uprisings, and outrages, among other forms. Violence Against Women, also known as  gender-based violence, refers to violent acts primarily or exclusively committed against women or girls. This kind of violence is often considered a hate crime, committed against women or girls specifically because they are females.

Violence Against LGBTQ+ is violence that is directed at people because of sexuality or gender identity. These forms of violence may be enacted by the state or by individuals. It could be psychological or physical and motivated by biphobia, homophobia, or transphobia. Influencing factors may be cultural, religious, or political mores and biases.  All of the topics include e-books, journal articles, videos and websites.

Also included in the LibGuide is a page that lists several databases that you can use to explore more information on these topics as well as those listed on the citation page. This page will also help you cite references you may find.

Need to know where to start looking for information on violence or even what violence covers? Check out this LibGuide to get you started. You will find a wealth of information you did not know existed. You can find the Combating Violence LibGuide by clicking on LibGuides under “Find” on the library homepage.