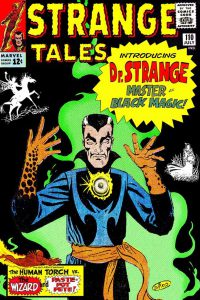 A man is being tormented by nightmares and he is seeking the aid of Doctor Strange.  Doctor Strange agrees to help the man. Strange then travels in sprit form to speak with his old master (the Ancient One) who resides deep in the mountains of Asia.  His old masters tells Strange that if danger should arise he should rely on his magic amulet.  Returning to his mortal form, Strange visits the man he promised to help. Once the man has fallen asleep, Strange enters his dream in his spiritual form.  Inside the dream, strange meets a man bound in chains calling himself Mr. Crang. Another from appears, Strange’s foe Nightmare.  The man whose dream Strange finds himself in begins to wake and realizes his nightmares are connected to all the men whose lives he has ruined.  Now fully awake, the man grabs a nearby gun to shoot Strange. Nightmare is holding Strange back from reuniting with his mortal form.  Strange uses his magical amulet to call his master, and his master places a hypnotic spell on the man. Strange returns to his mortal body from the dream dimension and takes the gun from the man who is still under the hypnotic spell.  The man then confesses his crimes to Doctor Strange.