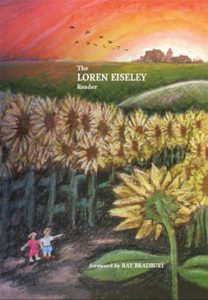 Floating down a lazy river may be relaxing and a good way to get some sun, but with the right kind of mind it can be a way to reconnect with the beginning of life on the planet. In his essay, The Flow of the River, Loren Eiseley takes an impromptu journey on the Platte River which becomes a meditation on the way water unites all life on Earth. With his unique blend of philosophy and science, wonder and understanding, Eiseley takes us on a journey through time, back to the mysterious origins of life in the primordial oceans.

“If there is magic on this planet, it is contained in water,” Eiseley begins his homage to the element that birthed us all (17). During his trip down the river he undergoes a transformation, a “curious absorption by water,” that allows him to slip off the mask of his personal ego and experience the universal pulse of life (18). The river acts as a sort of natural sensory-deprivation tank, or rather a sensory-expanding stream that creates a feeling of connectedness with the water that spans the globe from the polar ice caps to atmospheric vapors. He feels simultaneously the chill of the mountain springs where the Platte begins in the Rockies and the warmth of the Gulf of Mexico where it ends. He is carried out of human time into the universal flow of time in which water moves mountains to the ocean grain by grain past the broken axles of prairie schooners and bones of mammoths.

Through this connection to water, Eiseley becomes connected with all living things. From the fish that swim around him to the frogs croaking on the banks, he traces the evolution of life from its mysterious creation in water to those animals that eventually left to roam the lands. He notes that humans are three fourths water, “detached ponds with their own swarming corpuscular life” and pontificates on how we are “but a way that water has of going about beyond the reach of rivers” (20). Even though we do not consider ourselves aquatic creatures, this is merely an illusion based on our proclivity for walking over swimming and our preference to remain dry. In reality each of us carries the ocean, our original home, within us, our blood flowing like rivers with a pulse as steady as the tides.

An even more intimate connection to animal life is made a few years after Eiseley’s floating adventure, when he returns to the Platte in the middle of winter. The river is frozen and the surrounding plains seem lifeless compared to his summer journey. By chance he comes upon a catfish secured in a block of ice. Out of scientific curiosity he decides to carve it out and take it home, thinking of a maybe dissecting the dead fish. To his surprise, after thawing out in his basement, the fish turns out to be alive. He sets his new pet up in a tank with the plan of releasing him in the spring when the river thaws.

Unfortunately his fish friend takes matters into his own hands, or fins rather, by leaping out of the tank in the middle of the night in a fit of instinct to return to the deep waters of the Platte. Eiseley laments the loss of the fish, a fellow member of the “water brotherhood,” and uses the occasion to think about how even though we inhabit different branches of the evolutionary tree, at our roots we are the same (23). “In many a fin and reptile foot I have seen myself passing by – some part of myself, that is, some part that lies unrealized in the momentary shape I inhabit” (23).

Eiseley’s understanding of evolution, the way all life is related if only we look back far enough, gives him a perspective on nature where humans are not as important as we appear to make ourselves, where we are simply a part of the larger whole. Listening to the symphony of sounds in nature, from the calls of animals and insects to the speech of humans, he finds in all “a grave pleasure without admitting any to a place of preeminence” (24). In fact we are all saying the same thing – “we’re here” – echoing the rhythmic assertion of organization out of chaos that inhabits all life, which began on Earth as the crashing of waves and murmur of rivers (24).

Flow of the River can be found in the collection The Loren Eiseley Reader available at Bellevue University Library located in the general collection. All books can be borrowed for 21 days with the option of renewal.