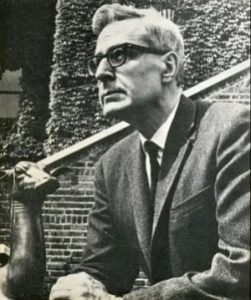 Loren Eiseley, anthropologist, philosopher, nature writer, and poet, was born in Lincoln, Nebraska in 1907. Renowned for his creative nonfiction essays on the natural world, Eiseley combines personal narrative with scientific research to illuminate the mysteries of nature, especially the evolution of humans, animals, and the universe, as well as the uniqueness of the human experience.

As described in his autobiography, All the Strange Hours, Eiseley had a tumultuous childhood. His mother suffered from mental illness and his father was unsuccessful in business, leaving the family nearly poor and creating a tense household filled with hostility between his parents. This left young Loren an outsider amongst his peers, a situation exacerbated by several moves from Lincoln to Fremont and Aurora.

Despite lack of access to the finer things, Loren’s father encouraged him to read and sparked his lifelong infatuation with language and writing. At the same time, his unfulfilling home life instilled in him a desire to flee into the solitude of the surrounding Nebraska plains or even into the underground sewers of Aurora, anticipating his future as an archeologist excavating fossils and his love of nature.

Eiseley attended Lincoln High School, then transferred to the Teachers College High School located on the UNL campus after complaining of the snobbishness of the upper middle class students. He found the TCHS a better environment for him to flourish in, in terms of his writing and his social standing, becoming captain of the football team and class president.

After graduation he attended the University of Nebraska at Lincoln where he wrote and edited for the school paper, Prairie Schooner, went on digging expeditions for the museum, and graduated with degrees in English and Geology/Anthropology. After receiving his master’s and doctorate degrees in anthropology at the University of Pennsylvania, he went on to teach at several universities and received over thirty-five honorary degrees in his lifetime.

His first book, The Immense Journey, published in 1946, is a collection of essays on evolution drawn on his early experiences in Nebraska and his anthropological and archeological work. In his career he published several collections of essays and poetry, as well as an autobiography, his last book.

Much of Eiseley’s work focuses on the nature of time and its relationship with life, both individually, evolutionarily, and cosmically. Drawing on his knowledge of evolution, Eiseley is able to compress the vast amounts of time that separate us from our ancestral progenitors and even different species, viewing life as a singular, powerful force of the universe that allows us to become connected with all manner of disparate beings, from animals to plants to stars.

Several of Eiseley’s works and biographies on Eiseley are available at Bellevue University Library, located in the general collection. All books can be borrowed for 21 days with the option of renewal.

Sources: All the Strange Hours by Loren Eiseley, 1975, published by University of Nebraska Press

Loren Eiseley the Development of a Writer by E. Fred Carlisle, 1983, published by University of Chicago Press