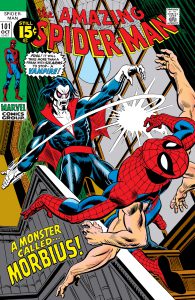 In the previous issue, Peter Parker created a potion that would take away his spider powers and allow him to live a normal life and settle down with the woman he loved, Gwen Stacey.  However, the potion has the opposite effect, giving him four extra arms.  Peter now believes he is a freak.  Seconds later his phone rings and Gwen asks him to meet her at the theater so the couple can watch a movie together.  To get her off the phone, Peter snaps at her and tells her to find someone else to be with.  Gwen is deeply sadden by the response but attempts to move on.  Peter attempts to think of the new arms as a benefit, but realizes that if Aunt May sees him like this her weak heart will give out.  The phone rings again, this time it is Joe “Robbie” Robertson from the Daily Bugle asking if he wants in on a late night photo assignment.  Peter declines the offer stating he is going to the country to rest.  Jameson is livid about the response but Robertson is more worried about Peter.  Both phone calls send Peter into a depression, worried that he has lost both his girl and his job.

Peter calls Dr. Curt Connors as Spider-Man and asks for help and if there is a place he can stay for a while.  Connors offers the web slinger his South Hampton home, telling the hero there is a key under the front door mat and a fully functional lab in the basement.  Spidey is forced to web sling his way to the Hamptons due his new appendages.

Once Spider-Man arrives at Connor’s home, the story transitions to a boat a mile away where the frightened crew are having a special meeting.  The ship’s skipper Captain Bloom is dead and several other sailors have died since they picked up a man in the ocean who is now in the ship’s hold.  The crew decides to confront the man.  The man is barely awake but he holds off the crew and makes his escape.  As day turns to night the crew make their way to their bunks and fall asleep. The mysterious man returns to the ship, but now his skin is pale and he looks like a vampire.  The mysterious man realizes the time is right, and slaughters the crew and drinks their blood.  As morning dons, the mysterious man is now rational and deeply regrets his beastly deed.  He decides to jump overboard in an attempted suicide.  The attempt fails and the mysterious man ends up on the beach in South Hampton.  He sees a familiar beach house and makes his way to the house.  Inside he makes his way to the top floor and falls asleep.

In the basement lab, Spider-Man is getting frustrated with his inability to reverse effects the potion he took in the previous issue. In his anger, the web spinner throws and breaks a test tube. The sound of breaking glass awakens the mysterious man, now referred to as Morbius.  Morbius begins spying on Spider-Man, although only recognizes the suit not the identity of the man who wears it.  He sees the web slinger’s new appendages, but totally compelled by his thirst and leaps down to attack the wall crawler.  Spider-Man is able rebound from the attack but soon finds himself with Morbius’ hands gripping his throat.  Spidey realizes that the attacker looks like a vampire but assumes it is just another kooky costumed super villain (after a 100 issues of Amazing Spider-Man plus Amazing Fantasy #15 Spidey has seen quite a few).  Spider-Man bats Morbius away, but the villain quickly has his fangs inches from the hero’s throat.  Spidey now realizes that he is fighting a vampire, and the calls the villain exactly what he is.  Morbius scoffs at the term and throws the web slinger down the second floor stairs. Dazed and unconscious from fall on the stairs, Spidey is in perfect position for Morbius to feast on his blood.  Suddenly, Dr. Connors walks in to check on the wall crawler when he is attacked. Barely able to get out the way, the fear and adrenaline transforms Dr. Connors into the Lizard.  The two then begin to bicker as which one them will kill Spider-Man.  Spidey awakes to find both monsters ready to pounce on him from both sides.