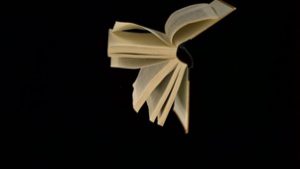 Well, looking up that idiom up made me go down the rabbit hole (which is an idiom that refers to Alice in Wonderland) to look up other common sayings, their meanings, and their origins. Here are 10 of those common sayings.

Some people dread a white elephant gift exchange because they usually end up with some random gift that is useless to them or even a small burden. This is why it is called a white elephant gift. This saying comes from an ancient Thailand tradition. White elephants were concerned sacred but a burden to care for. “…if an underling or rival angered a Siamese king, the royal might present the unfortunate man with the gift of a white elephant. While ostensibly a reward, the creatures were tremendously expensive to feed and house, and caring for one often drove the recipient into financial ruin.”

If you stay out all night with friends having fun, you can also call it “painting the town red”. This phrase started on one drunken night in 1837. Marquis of Waterford and group of his friends in the English town of Melton Mowbray caused mischief like breaking flower pots and windows but also literally painting things in the town red.

When someone faces a hardship or do a task they don’t want to do, they must bite the bullet to get it done with. This phrase likely refers to pre-anesthesia and pre-pain-medication surgery. When soldiers in the 18th and 19th century were injured enough to require surgery, doctors would have the poor fellow bite down a bullet to endure the pain (and muffle screaming). Yikes.

You might butter up your professor by complementing her and bringing her treats to raise that B+ to an A- but flattery will get you nowhere if you don’t do your assignments. This idiom comes from ancient India when devout followers would throw balls of butter at statues of their gods. This was thought to bring them favor and forgiveness.

When you ignore someone, your shoulder isn’t literally cold (but it could be if you are wearing tank top). In this case, the shoulder refers to the shoulder of mutton, pork, or beef served cold. This was given to guests by a host when they felt it was time for their guests to leave. So, the meat meant “get out of my house”.

Marquis and his friends engaged in tomfoolery (mischief) when they drunkenly ran around town but who the heck is Tom? Tom, Dick, and Harry were used during the Middle Ages to describe any person, just like John Doe. Tom fool was just a generic fool but a particularly absurd one. Tomfoolery refers to foolishness that went beyond lightheartedly scaring your friend form behind the door.

Like the Marvin Gaye song (or the first to be released Gladys Knight version or the first to be recorded Miracles version) suggests, this saying refers to rumors and gossip.  “Through the grapevine” was first referred to in the 1850’s with the invention of telegraph lines. “Where the telegraph was a straight line of communication from one person to another, the ‘grapevine telegraph’ was a message passed from person to person, with some likely twists along the way.” Grape vines grow in twists.

I was constantly reminded of this term while watching the 2022 Winter Olympics this past month and the delayed 2020 Summer Olympics last summer. None of my athletic skills can hold a candle to those stunning athletes. “Can’t hold a candle” means someone’s skills don’t even come close to being as good to someone else. It comes from the time before electricity where the guy who was bad would hold the candle up for the skilled guy to see. Some people were so unskilled that they were not even fit to hold the candle for the person to do their job.

Be sure to look at the stuff you throw out as you spring clean so you don’t accidently toss something valuable. Long ago, before running water, families would share one bathtub and use the same water to bathe. The man of the house would bathe first, then the other males of the household, women next, and finally, the babies. The water would get disgusting and murky as you can imagine it would. The old wives tale is that women had to be extra careful not to lose the baby in the water or they might throw baby out when the water was finally discarded.

This is the time of year that some people give something up for a short period. Some might even go cold turkey or quit something abruptly. One theory on this phrase’s origin comes from 1978: Some addicts when going through withdrawal experience bad goosebumps and it looks the skin of a turkey when all the feathers are plucked.

Another theory is that cold turkey could refer to telling someone something straight, no jive. This appeared in a newspaper cartoon on November 12, 1920 when the character Thomas “TAD” Dorgan says “Now tell me on the square – can I get by with this for the wedding – don’t string me – tell me cold turkey.”

The last theory it is a combination of cold, as in straight forward and as a matter of fact, and talk turkey which early 1800’s talk for speaking plainly. I bet you expecting conspiracy theories for 3-word phrase.

What are some of your favorite phrases, common sayings, and idioms?