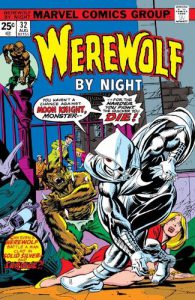 In a rundown alley, the Werewolf is in the midst of a tussle with a costumed individual referred to as Moon Knight.  Moon Knight uses his repertoire of silver weapons to attack the Werewolf, throwing three crescent shaped throwing darts at the monster while punching him with a silver cestus.  A crowd has assembled to observe the dust up as the Werewolf howls in pain.  A portion of his mind begins to reevaluate some of the recent events he has experienced.

The night before, Jack Russell transformed into the Werewolf during a trip to Northern California to engage in some skiing.  As the Werewolf, Jack viciously attacked his friend Buck Cowan.  The Werewolf retreated to the snowy woods and spends the night under some fallen trees.  Buck was taken to Westwood Hospital where the on call surgeons struggled to keep him alive.   Jack awakes up the next morning not knowing where he is, or the condition of his friend Buck.  Jack hitchhikes back home where his stepfather fills him on Buck’s wounds.  Jack quickly makes his way to the hospital where he meets meets Lissa Russell and Topaz.  They fill Jack in on how Buck is in critical condition and has fallen into a coma.

Jack returns home only to find to Moon Knight standing in his living room.  Moon Knight informs Jack that he knows he is a werewolf and the Committee will pay him $10,000 for bringing him in alive.  Philip Russell takes hold of Moon Knight long enough for Jack to escape.

Elsewhere, Victor Northrup takes an airplane to Haiti searching for the former Werewolf, Raymond Coker.  Coker is engaged in a very serious conversation with the elderly Voodoo Jeesala of the Thousand Years.  She informs Coker that he is still cursed by the mark of the Man-Beast.