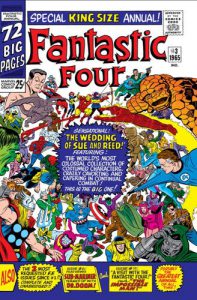 Synopsis of “Bedlam at the Baxter Building!”

Doctor Doom is reading a newspaper when he notices an announcement for Reed Richards and Susan Storm’s wedding day.  Somewhat jealous but mostly angry, Doom decides to ruin the pair’s nuptials.  Doom decides use his emotion changer device to inspire the entire roster of Marvel supervillains, whether they are foes of the Fantastic Four or not, to attack the wedding.

The wedding is to be held inside the Baxter Building, headquarters of the World’s Greatest Superhero Team, the Fantastic Four. Onlookers begin to arrive outside to see the celebrity guests like Tony Stark.  Among these onlookers are Millie the Model and Patsy Walker who both hold down their own romance books for Marvel.

Nick Fury and S.H.I.E.L.D. are tasked with security for the wedding, and turn away a guest who is with Ben Grimm (The Thing) who has been poisoned by the Puppet Master. Before Ben can alert Reed about the incident, Mole Man and his subterranean Moloids attack the Baxter Building from below.  Professor X summons the X-Men to help Ben hold the Moloids off.  Meanwhile Reed, Sue, and Johnny are attacked by the Red Ghost and his Super-Apes.  Their menace is stopped when Dr. Strange appears and sends the foes to another dimension.

Doom is irritated that his initial wave of supervillains have not completed their mission and increases the power of the emotion changer.  Now making their way to the Baxter Building are the Mandarin, the Black Knight, Kang the Conqueror, the Awesome Android, and the Grey Gargoyle.  Meanwhile other superheroes are contending with villains called by the emotion changer including Thorn being attacked by the Super-Skrull, and Daredevil noticing hydra agents looking to send a missile to the Baxter Building. The missile lands in New York harbor, stopping an undersea force led by the villain Attuma the Barbarian.  The Avengers Captain America and Hawkeye, along with your friendly neighborhood Spider-Man, arrive to hold off Cobra, the Executioner, the Enchantress, Mr. Hyde, and the Mad Thinker.

Daredevil has changed dance partners from Hydra to the Black Knight, but is unable to receive assistance from the X-Men as they must confront new arrivals the Mandarin, Electro, the Unicorn, the Melter, and the Beetle.  At the same moment, Quicksilver is battling the Human Top.

All of these fights eventually turns into an all-out brawl between superheroes and supervillains. In the midst of the onslaught, Reed is summoned to the Watcher’s citadel where he is given a device that will transport all the villains away and leave them with no memory of the fight. With that, Reed and Sue are married before their friends and family. Just outside of the ceremony, Stan Lee and Jack Kirby are turned away from the ceremony because they do not have invitations.  The pair leaves and claims there will be retribution.