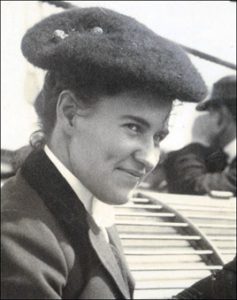 Perhaps the most famous Nebraska author, Willa Cather is known for her depictions of rural Midwestern life, often juxtaposing it with modern metropolises. Born in 1873 in Virginia, Cather moved with her family to her grandfather’s farm near Red Cloud, Nebraska when she was nine. An independent child, Willa flourished on the open plains and small town of Red Cloud, where she fit in well among immigrant farmers and teachers, enjoying the countryside as well as more artistic and intellectual endeavors.

These formative years would be used in nearly all of her literary work as she returned again and again to Nebraska and the Midwest in her novels and stories. At sixteen she moved to Lincoln, and a year later entered the University of Nebraska. There she worked at the Nebraska State Journal, writing an opinion column which included theatre and literature reviews and criticism. These writings are the beginning of Cather’s professional infatuation with art and its impact on life, a theme she would consistently employ in her career.

In 1896 Cather moved to Pittsburg where she continued writing for magazines and newspapers and began working on her literary writings. Between 1901 and 1906 Cather traveled to Europe, published her first book of poetry and a book of short stories, and eventually moved to New York City where she became managing editor of McClure’s Magazine.

Her first novel, Alexander’s Bridge, published in 1911, is set among the well-to-do of Boston. Most of her subsequent writing would return to the Midwestern lands she loved, often focusing on immigrant pioneers. She would continue to draw inspiration from the land and people of Nebraska and the Midwest, often moving characters from farm to city just as she had done in order to show the desire for the big city and contrast she felt upon arriving.

Like her characters, Cather found the Western landscape a source of artistic inspiration but felt the need to escape the rigidity of rural life to seek out peers with similar artistic passions. While her works do not make light of the strife of rural life, they tend to idealize and sanctify the land and nature, which becomes an idyllic backdrop when the shift to a big city displays the hollowness of modernism and materialism. Her novels reflect her love of the simple rural life and the hardships of urban congestion, while always focusing on the role of art as redemption in both areas. Throughout her career she published twelve novels, six books of short stories, and a book of poetry.

Several of Cather’s works are available at Bellevue University Library, located in the general collection. All books can be borrowed for 21 days with the option of renewal.