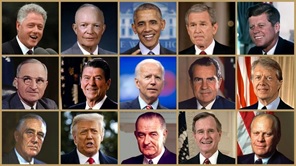 No, I am talking about how Andrew Johnson was buried with his head resting on a copy of the Constitution and the middle initial of “S” in Harry S. Truman is not an abbreviation and does not stand for another name (just like the “J” in Michael J. Fox). I got the last two presidential facts from this list and there is more to behold there. You can read it after you read mine.

I have to end this here because it will get too long if I put all 46 presidents. However, I will post a follow up tomorrow which you can find HERE.