You may know of Ham the Chimp, the first chimp that went into space, and Laika, the most famous space animal that went to orbit (who, unlike Ham, sadly did not survive the trip). But did you know more animals went into space? Guinea pigs, mice, reptiles, fruit flies, more dogs than just Laika, Rhesus monkeys, rabbits, and rats did as well.

Side note: The Soviet Union launched a mannequin named Ivan Ivanovich (the Russian form of “John Doe”) into space twice to test radio communication (they had a recording of a choir singing and a recitation of a recipe for cabbage soup play over the radio signal so that if anyone picked it up, they would not know the true source of it), ejection, and parachute landings. The Soviets wanted to make Ivan as real as possible for some reason, and this is what he looks like:

Yeah… Not creepy at all. Can you say “Uncanny Valley”?

Ivan looked so real that when they launched him (with animals IN his “body”), they had put a sign under his visor that said “MAKET” that means “dummy” in Russian so that people who found would not think he was dead or an extra-terrestrial.

ANYWAY… Ivan didn’t invade the White House, although he was in Washington D.C. He was on display in the National Air and Space Museum until 2017 (he now resides in Ross Perot’s private collection). The invaders in question were of the quadruped variety and requires a little backstory.

Belka and Strelka were the first higher living organism to survive in space after spending a day in in space aboard the Korabl-Sputnik 2 and returning safely in 1960. Strelka would had have 6 puppies, including a pup named Pushinka (Russian for “Fluffy”). Nikitia Khrushchev gifted this puppy to John F. Kennedy in 1961. Jackie Kennedy had spoken to Khrushchev about Strelka and her puppies at a state dinner in Vienna and soon, Pushinka arrived at the White House with her own passport. 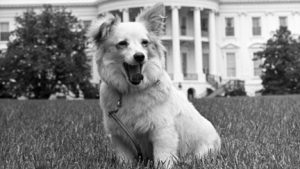 Since it was still the Cold War, Pushinka was examined by the CIA because they feared their might a listening device concealed in her dog-self. She was x-rayed, screened with a magnetometer, and had a sonogram to clear her of such devices.

After being in the White House for a while, Pushinka became pregnant by one of Kennedy’s dogs named Charlie, a King Welsh terrier. She gave birth to 4 puppies in 1963. JFK jokingly called these puppies “Pupniks”. 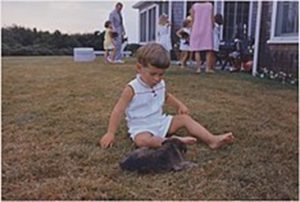 Two of the Pupniks, Butterfly and Streaker were given to children in the Midwest after the White House received 5,000 requests from the public asking if they could have one of the puppies. The other two, named White Tips and Blackie stayed with the Kennedys at their home on Squaw Island. Eventually, they were given away to family and with one going to Patricia Kennedy and her husband, actor Peter Lawford.

I like to think that Pushinka helped to end the Cold War. 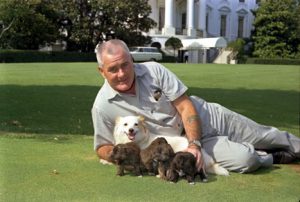 Pushinka and her puppies with White House electrician and kennel keeper Traphes Bryant. 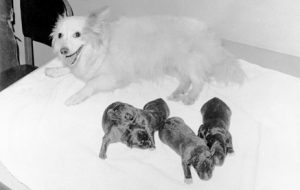 Pushinka with her puppies, two boys and two girls.

P.S. (Did you know that there were 2 more dummies in old Soviet space suits orbiting the Earth relaying messages recorded from the people who worked on it and students from all over the world called SuitSat-1 and SuitSat-2?)