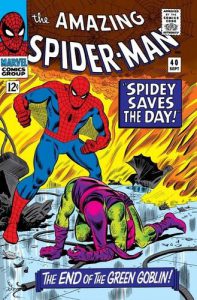 The Origin of the Green Goblin

Synopsis of “Spidey Saves the Day! Featuring: The End of the Green Goblin!”

In the previous issue, the Green Goblin discovers that Peter Parker is Spider-Man.  The Goblin captures Peter and takes him to his lair.  In the final panel, the Green Goblin removes his mask and reveals his secret identity to Peter, Norman Osborn!

Now Peter is trying to stall Osborn while he attempts to break free of his steel bonds.  He brings up Norman’s son Harry.  The rouse works and Norman begins discussing how he worked constantly to provide for his family, but spent more time with his work than with his son.  Norman explained how he set up Professor Stromm to police for theft, and then began researching the formulas that Stromm had left behind.  While working one of the formulas it exploded and he was sent to the hospital.  The explosion changed him, he was now obsessed with becoming a super villain and planned to use Oscorp’s resources to further those ambitions.

Still struggling to release his steel bonds, Peter continues to listen to Norman/the Goblin’s ravings.  The Goblin recounts how every altercation with Spider-Man was actually a victory and not a defeat.  The Goblin releases Peter from his steel bonds so that he and Spider-Man can fight on even terms.  However, it is not a fair fight, as the Goblin uses stun bombs, an electrical whip, and a Goblin Cannon.  Spider-Man is able kick the Goblin, who immediately falls back into a mess of live wires and chemicals that creates a deadly fire.

Spider-Man rushes to save the Goblin from the blaze. Norman wakes up and does not know why he is in costume.  Spider-Man does not want to hurt Harry or destroy Norman’s reputation; he quickly changes out of costume for the police and takes Norman to the hospital.  Peter returns home to ailing Aunt May and Harry visits his father in the hospital.