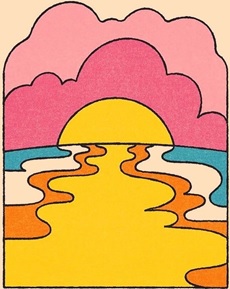 But what is Sunshine Pop? It is a sub-genre of Pop music. The term was coined in the mid-1960’s to describe songs that are were coming out of the Southern California music scene. Sunshine Pop has rich harmony vocals, lush orchestrations, and relentless good cheer. I love mid-century history so this is right up my alley.

Here are some of my favorite examples of Sunshine Pop. All these and about 45 more songs can be found on this Spotify playlist I made so you can give it a listen at any time. Some of this songs are not technically Sunshine Pop since they are not by American artists or from the California scene but they were imitating the sound so I included it.

I Saw Her Again by the Mama’s and Papa’s

I’ll Never Find Another You by The Seekers

Like To Get to Know You by Spanky and Our Gang (Fun fact: They performed this song on the Ed Sullivan show on my birthday, March 24th… just 30 years earlier.)

Windy by the Association

Groovin’ by The Young Rascals

The Rain, The Park, and Other Things by The Cowsills (Fun Fact: This musical family of six boys and one girl was the basis of the Partridge family, who by the way, was not a real family except Shirley Jones and David Cassidy.)

Last Train to Clarksville by The Monkees (Fun Fact: This song and the Monkees themselves were written to be the foil for The Beatles. In this song, they sing “Oh no, no, no” in the same vain as The Beatles’ “Yeah, yeah, yeah” in the song She Loves You.)

My Back Pages by The Byrds

Up, Up, and Away by The Fifth Dimension

I dare you to give these songs a listen and to expand your musical palette. You might even find something you like…