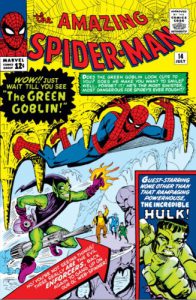 Synopsis of First Appearance: “The Grotesque Adventure of the Green Goblin”

Flying through the skies of New York City is the newest costumed supervillain, the Green Goblin.  He has only recently perfected the ability to use his flying broomstick (no goblin glider yet) but makes good use it by touching down next to the recently released from prison, team of villains, the Enforcers, with a plan to help them get their revenge against Spider-Man.  The Goblin then makes his way across the country to California and offers the deal of lifetime to the filmmaker B.J. Cosmos.  Cosmos has just come off the blockbuster film “The Nameless Thing From the Black Lagoon in the Murky Swamp,” and is interested in the villain’s proposal.  It is simple: a movie about Spider-Man.

Return to the Big Apple, the Goblin stalks the skies around the city attempting to get the attention of the web-head.  Spider-Man makes his acquaintance with the Green Goblin and the latter offers to make a movie about the web slinger.  Spider-Man agrees to participate, and soon the news reaches the ear of the editor and publisher of the Daily Bugle, J. Jonah Jameson.  Jameson decides to send Peter Parker to Hollywood to get the scoop on the story.  This decision worries Betty Brant who is afraid Peter will fall for some starlet while he is in La La Land.

Peter arrives in California and heads for Cosmos’s studio as Spider-Man.  Cosmos flies Spider-Man, the Green Goblin, and actors dressed like the Enforcers (who are in fact the actual Enforcers) to New Mexico to film an action sequence.  However, the entire film sequence is a ruse and the Green Goblin and the Enforcers begin to fight your friendly neighbor, Spider-Man, across the desert.  The fight eventually makes its way to a cave, where the wall crawler defeats the Enforcers with a certain level of ease.  There is a one rather large green caveat to Spider-Man’s victory over the Enforcers: the cave is the hiding place of the Hulk.  To escape a losing fight with the Hulk, he tricks the green goliath into smashing a bolder that blocks the cave’s exit.

Spider-Man is unable to apprehend the Green Goblin and decides to wait out the Hulk until he leaves the cave.  The Enforcers rounded up the authorities, and Spidey makes his way back to Hollywood.  Speaking with Cosmos, the web-head learns that the director has ditched the Spider-Man movie idea for an Incredible Hulk picture.  Spider-Man demands his payment for work on the film and is reminded by Cosmos that the web slinger’s contract stipulates that he would only be paid if the film was completed.  Peter is forced to use the last bit of his money from Jameson to pay for a bus ride back to New York City.  At the same time, somewhere in the Big Apple, the Green Goblin now in his civilian clothes, plots his next his next deadly encounter with Spider-Man.