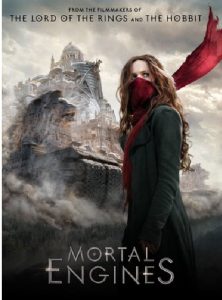 “It was a dark, blustery afternoon in spring, and the city of London was chasing a small mining town across the dried-out bed of the old North Sea.”

This is where our tale begins, in a world that will – eventually – be our own. In this post-apocalyptic future, society revolves around the philosophy of Municipal Darwinism; a dog-eat-dog world, or rather, more specifically, for the setting of Mortal Engines, a city-eat-city world. The earth has been made inhabitable by a cataclysmic event in the far past, and in the future, “cities ride on wheels, consuming each other.” A technological ecosystem has sprung up the wake of civilization, a brutal, unforgiving world that bring triumph to the strong and powerful, and culls the weak, all in a bid for survival. Smaller cities, which inevitably end up consumed, are used for their resources, both for mechanistic purposes (i.e. fuel, machine parts, or as metals to be melted down), and a food resource (humans captured by larger cities are either enslaved or used as a source of… protein). Yes, you read that correctly. Protein.

Our protagonist, Heather Shaw, is an unusual girl. Orphaned at a young age, she grew up with a singular goal in mind: To kill, in retribution, the man who murdered her mother.

After a mining town, upon which she was a temporary resident, is consumed by the predator city of London, Heather sets her sights on the man that ruined her life. However, the assistant historian, Tom Natsworthy, foils her assignation attempt. Caught red handed, Hester absconds from the scene. Tom runs after, seeking to turn her over to the authorities. However, upon an encounter between the two, he becomes privy to some information that gets him exiled from the city of London. The two of them, lost in the Wastelands of a decrepit earth, must become unwitting allies as they strive to find their way back to London: For Tom, as a means of returning to the city from which he was exiled; and for Hester, as a means of carrying out her revenge.

Underneath the glittering façade of the prestige and power of London, there is a darker force at work. A return of an old technology that can, once again, rip apart an already sundered world.

With such a complex world, and a rich and interesting premise, one might have expected Mortal Engines to be a box office hit. Given the creative talent behind the film, how can you expect anything else? The film is directed by renowned storyboard artist Christian Rivers, and the screenplay was written by Peter Jackson, Fran Walsh, and Philippa Boyens. Unfortunately, that was not the case. The film had so much going for it, and yet it did not perform well.

Simply put, there is too much going on in the narrative for it to have been properly condensed into a two hour movie. Even though the novel, Mortal Engines, is a book geared toward a younger audience (and is less than three hundred pages long), that does not detract from the complex political themes that run throughout the story, as well as the attention to detail the author, Philip Reeve, placed in the mechanistic aspects of the predator cities, such as the city of London.

There is too much history, terminology, and philosophy that goes into the buildings of these fictional worlds; it is easier for these aspects to be explored in the written medium, as the author is granted more “page-time” to delve into these concepts. A movie, on the other hand, is grossly undermined by its temporal limitations. Considering this, all of the foibles of the film could be forgiven. Or, in the very least, understood. However, there is one aspect of the film that cannot be looked past: The beautification of Heather Shaw.

Heather Shaw is not an attractive person. That is not to say that she is ugly – no, not at all. But she does have a deformity. It was not something that she was born with. Rather, it was through a tragic experience she had when she was a young child, which left her permanently scarred.

In the book, her appearance is described as such: “She has a scar which cut her face from forehead to jaw, a wrenched mouth, a stump nose, and a single eye.”

Yet, in the film, when her face is revealed, all you see is a small scar that had, quite obviously, been digitally edited onto the actor’s face. The character is treated with a lot of derision due to her appearance in the books; in fact, it is one of her core insecurities that plagues her, even into her later life. The severity of her scarring was greatly diminished so that the film would appeal to a wider audience. Heather Shaw’s      ill-treatment in the film does not carry the same impact as it does in the books and is, upon reflection, unbelievable.

If you have not read the books, then you can expect a thrilling, spectacle-driven movie-going experience. However, if you do happen to be a fan of the books, you might be sorely disappointed.

Mortal Engines can be found within the Bellevue University Library’s audiovisual collection. The DVD can be checked out for seven days and can be renewed.