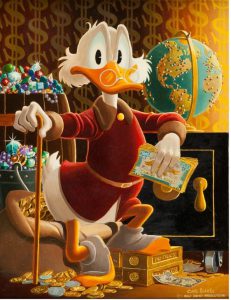 Base of Operations: The Money Bin, Duckburg, Calisota

It is Christmas Eve in Duckburg, and Scrooge McDuck hates it.  Scrooge, a rich and grumpy old duck living in a vast cold mansion muses, “Everybody hates me, and I hate everybody!” Only one of his relatives Donald Duck (actually 4 counting Huey, Dewey, and Louie) live in Duckburg of whom he has never actually met.  Automatically, the world’s richest duck assumes that his nephew is a “yellow livered parasite.” Scrooge decides to see how brave his nephews are by inviting them to stay the night at his cabin on Bear Mountain, which he has stocked with food and gifts.  Then in the middle of night, Scrooge will put on bear costume and break into the cabin to test their bravery.  Scrooge’s plan goes awry when real bears break into the cabin before any of the ducks arrive causing mass hysteria and confusion.  The entire plot has a positive ending as it causes Scrooge to find joy in his life again.