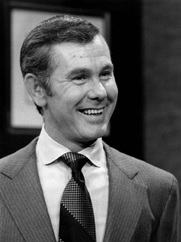 If you have ever visited the Blarney Stone, built into the battlements of Blarney Castle near Cork, Ireland, you would know that it endows the “gift of the gab” to anyone who kisses it.  It makes you wonder if talk show hosts are compelled to visit it before accepting and undertaking a TV talk host assignment.

Today, is “National TV Talk Show Host Day” acknowledging those who entertain us with their unique form of humor, spontaneous wit, and tasteful, timely political jokes.  Did you know that the first-ever talk show aired 70 years ago in 1951?  Nevertheless, this day was chosen as the date to celebrate in honor of the late night television personality, Johnny Carson, who was born on October 23, 1925.  Carson hosted The Tonight Show for almost 30 years.  Another great talk show host legend, David Letterman, of the famed Late Night with David Letterman Show,  once said “I cannot sing, dance or act; what else would I be but a talk show host.”  Craig Ferguson who hosted The Late Late Show for 10 years once said “Don’t ever rope me in as a late-night talk show host.  I don’t want to be one.”  Perhaps, Johnny Carson said it best when he said “I am one of the lucky people in the world:  I found something I always wanted to do, and I have enjoyed every single minute of it.”

There are a variety of talk shows and everyone has a favorite that makes us laugh, cry, listen, and learn.  They can be found in the morning, the afternoon, and evening.  What they all have in common is they frequently have guests who are famous themselves, made headlines for a good deed, a stunt they attempted, or an unusual invention.  In addition, they all discuss current events, health updates, and technology news; rely on audience participation; often accompanied by a sidekick, music, or both.  Regardless of which show we watch, one thing is certain—we will be fascinated, captivated, and engaged!

The most celebrated talk show hosts are:

How many have you watched?  Who’s your favorite? Who do you think belongs on this list?  Let us know your thoughts…  To learn more about this phenomenon, check out these resources:

How to Become a Television Talk Show Host