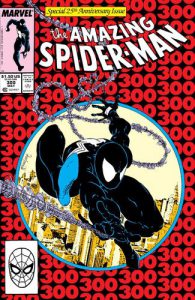 The end of The Amazing Spider-Man #299 featured a cameo of Venom, and at the beginning of this issue, Mary Jane Watson Parker is scared beyond belief to the point she cannot even remember her own name at the sight of Venom.  Spider-Man comes home in his cloth black costume scaring his wife so he takes off his mask to reassure her.  Mary Jane explains that the intruder was a large man wearing a Spider-Man suit and had an evil toothy grin.  Mary Jane states that she cannot stay in their apartment that night, so Peter packs a bag and they decide to head to a hotel.  Peter wonders to himself what could have given Mary Jane that kind of a scare.

A man walks up the sheer side of a downtrodden Brooklyn tenement.  He regrets that he had to leave because of the screaming woman. He states that he will run into Spider-Man eventually as his Spider-Man suit disappears. The man begins lifting weights to assure success when he finally meets the web slinger.

At the Lyden House Hotel, Peter cannot sleep thinking about who could have come to their apartment and realizes that it could be his old costume, the alien symbiote costume. Peter recounts to himself as to how he obtained the suit on Battleworld during the Secret Wars.  Eventually, Peter asked Mister Fantastic of the Fantastic Four to examine the suit and he explained that the suit was trying to permanently bond with him.  With the sonic cannon, the suit/creature was removed from him but it escaped and later it tried to bond with him again but he was able to get to the top of Our Lady of Saints church and used the shattering clamor of the bells to destroy the creature.  Mary Jane wakes up and tells him to return to bed.   Peter apologizes to Mary Jane saying that he thought his secret identity would protect her, but Mary Jane responses that she married him for better or worse.

In the morning, Mary Jane tells Peter that they have moved to the top of list of applicants at Bedford Towers.  She also explains that she no longer feels comfortable in their Chelsea apartment.  She asks Peter to go back to their apartment and get his camera so they can take pictures of their new place before moving in. Before Peter goes to his old apartment, he puts on his costume and picks up the sonic cannon from the Fantastic Four’s headquarters, The Four Freedoms Plaza, in case the intruder is in the apartment.  Once at the apartment he asks himself how many times he has gone through the skylight as Spider-Man.  He notices a message on Mary Jane’s answering machine from Aunt May inviting Peter and Mary Jane to dinner that evening.  Peter cannot wait to tell Aunt May that they were going to move into Bedford Towers.  Peter puts on his street clothes and heads outside, however, he gets the feeling someone is following him but his spider-sense is not going off.  A burly blonde haired man who had been stalking Peter regrets his failure. At Bedford Towers Mary Jane cannot believe she is going to live in a place that big and asks Peter to take fashion shots of her.  Peter is not very good with taking those sort of shots.

Peter and Mary Jane make it to Aunt May’s house that evening.  Nathan Lubenski scolds Peter for not spending enough time with Aunt May but May rebuffs him saying he needs to set up his new life with his wife.  While washing the dishes with Mary Jane, May admits the she is trying to distance herself from the new couple and does not want to harm their marriage.  Mary Jane tells her that both she and Peter definitely want her in their lives.  Happy to hear the news, May informs her nephew she had better be the first guest to their new apartment.

Across town, Peter’s stalker has made his way to the Our Lady of Saints church, the place where Peter believes the symbiote creature was destroyed.  The stalker believes that this is the perfect place to end the life of Spider-Man.  At that moment, a young beat cop shows up and believes the stalker is responsible for the recent theft of the church’s collection boxes for the poor.  The stalker ends his conversation with the symbiote and it appears from the stalker’s leg and smothers the cop to death.

The next day, Peter and Mary Jane’s friends including Harry Osborn, Flash Thompson, and Robbie Robertson help the couple move in to Bedford Towers.  Later that night on the balcony, Peter tells Robbie that he is considering going back to school.  During their conversation, Peter sees his stalker web slinging in the distance and politely excuses himself.  Putting on his Spider-Man costume and grabbing the sonic cannon, Spider-Man goes out to track down his stalker.

Spidey finds his quarry in the South Bronx and believes he should be able to get the drop on his stalker using his spider-sense, but that is not the case and his stalker gets the drop on him.  Spider-Man decides to stall for time to get to the sonic cannon when the stalker declares, “You may call me Venom—for that’s what I’m paid to spew out these days!  I’m your victim, Spider-Man—I’m the innocent you ruined!”  Venom lowers the mask from his face revealing himself to be Eddie Brock.  Brock had been a reporter for the Daily Globe during the Sin Eater murders and had taken the confession of Emil Gregg for the Globe, however when Spider-Man captured the Sin Eater he was actually revealed to be Stan Carter.  Spider-Man’s actions destroyed Brock’s career, making the Globe a laughing stock and Brock’s professional ethics forever questioned.  Brock took out his rage by becoming a body builder using his hatred of Spider-Man as his inspiration.  Eventually, Brock got to a point where he could not handle it and decided that suicide was his only option.  He was about to end his life in Our Lady of Saints church when a shadow crept upon him, the symbiote! Their shared hatred of Spider-Man bonded them more tightly than Peter ever could have.  The symbiote gave Brock all the information it had on Peter and gave him access to all of Spider-Man’s powers.

Spider-Man now lunges to get a hold of the sonic cannon, but he is hit through the floor by Venom.  Spidey realizes that Venom is more powerful than he is, decides to use his experience and skills to outsmart his newest foe.  The wall crawler gets the sonic cannon and fires it on Venom, but he realizes that Brock and Venom are permanently bonded and using the weapon could kill Brock along with the symbiote.  Spider-Man tries to flee and create a new plan but Venom pulls in Spider-Man with his webbing and lands a knockout punch.

When Spider-Man awakens, he finds himself webbed to church bells.  Brock appears in priest’s garb thanks to the symbiote and explains to Spider-Man that when the bells ring at midnight it will kill him; however Brock must go down stairs as the ringing of bells can harm the symbiote.  Spider-Man struggles to free himself and eventually gets a hand free and grabs the clapper.  As the clapper swings, it releases the wall crawler.  Venom sees Spider-Man escape his trap and goes after him.  The chase is on and Spider-Man remembers that Puma told him that the webbing used by the symbiote was organic and therefore is made from the symbiote’s own substance and will need time to replenish the supply.  Spider-Man forces Venom to use as much webbing as possible on him, which causes the symbiote to lose its form giving Spider-Man the opportunity to knock Brock out.

Spider-Man makes a call to Bedford Towers, pulling down his mask and asks the security guard there to give Mary Jane a message that he was following a big news story.  Later at the Four Freedoms Plaza, Spider-Man and the Thing (Ben Grimm), the current leader of the Fantastic Four, discuss the sonic pipes chamber that Brock and the symbiote are being held in. The Thing called Mister Fantastic who explained how to create the chamber over the phone.  Spidey thanks Ben and he responds, “Hey, no problem. Only next time, try to bring yer loonies in a little earlier, will ya?”

Spider-Man heads to the new apartment at Bedford Towers, finding an upset Mary Jane due to his early exit from the house warming party.  Peter apologies and Mary Jane says that real problem is not that Peter is Spider-Man but that he is wearing the black costume.  Peter agrees, he cannot go out wearing the costume of homicidal maniac that is permanently bonded to the symbiote.  Peter throws the suit into the fireplace, but asks how he is going out with just his web shooters, utility belt, and undies?  Mary Jane suggests the commercial copy of his original red and blue costume he picked up in Germany during a tussle with Wolverine.  Peter responds saying, “Mary Jane I think—you’re the greatest!”  The text then reads: “A lingering kiss, a quick change of clothes, and the legend begins anew!” The page that features the line “the legend begins anew!” depicts Spider-Man in his original costume with Todd McFarlane’s take on “the emperor’s old clothes!”