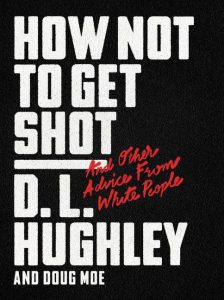 What is the best tactic black Americans can use to avoid being shot by the police? With the proliferation of recording devices and resurging drive to right continuing injustices against people of color in the United States, a lot of focus has been directed toward police violence toward African Americans. Amid calls to ‘defund the police’ and roll back qualified immunity doctrine for officers, some white commentators have also offered advice to the black community on how to avoid the violence entirely. In his book, How Not to Get Shot: And Other Advice from White People, D.L. Hughley translates this “helpful” advice into workable steps, upon which an implicitly black audience can act to successfully “not get shot.” However, the bottom line argument in D.L. Hughley’s scathing satirical commentary is simple: “don’t be black.”

Hughley, a professional comedian, narrates his own audiobook. He is able to play the book as a full stand-up routine, moving between sober facts and full comedy, skillfully keeping his audience engaged in his message. Some topics covered in his book include:

Without falling into a lecturing style, Hughley expertly paints a picture of the black experience in the United States. He points out the contradictions in the excuses police and white pundits make for systemic violence against black Americans. He discusses the N-word, who should decide if something is racist, and the Star Spangled Banner. His assertions are consistently backed up by statistics, anecdotes, and other evidence from reputable sources.

Taken in isolation, each piece of “helpful advice” white people give black victims of police violence seems reasonable. However, this book points out the obvious situation the United States faces–there is a pattern of violence, and blaming the victim is not a viable solution. While black people may listen to the book and nod in agreement, white people may simply listen and begin to understand the magnitude of the problem and their place in finding a way out.

This hard-hitting and hilarious audio book provides the listener with an unflinching look at the reality of being black in America. Laughter is often the best vehicle for the delivery of difficult issues, and this audiobook certainly delivers both. You will laugh until you cry! Come check it out for 21 days from the Audio Book section of the Bellevue University Library, and listen for yourself!