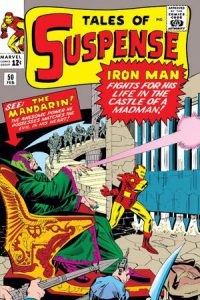 Synopsis of First Appearance: “In the Hands of the Mandarin!”

Deep in Red China (1964) a servant of the egotistical and extremely secretive Mandarin tells his liege that four officers from the Red Chinese Army have come to his lair and have much to discuss with him.  The Mandarin allows the officers to enter his abode and questions as to why they have come to his lair.  The officers want the Red Chinese government to join forces with the Mandarin and menace the world together.  The quartet are also keen on the Mandarin sharing the secrets of his power rings. The Mandarin is outraged by their proposal and refuses them, sending them on their way.

In the United States, Iron Man receives a request from the Pentagon to run a surveillance mission over China to gain information about the Mandarin.  The mission causes Tony to take a rain check on the evening’s Stark Industries dinner with his employees. Tony tells the planner of the evening’s gala, Bill, that he will be not attend, and Bill questions out loud if Tony is too busy to mingle with the little people.  Happy Hogan takes offense to Bill’s comment and punches him in the jaw. Tony gets between the two men and tells them not to come to blows again and that his employees can say anything they want about him whenever they like.  Pepper Potts heckles the three for not noticing her new sexy makeover.

Sometime later, Iron Man drops out of a military plane into China.  The Golden Avengers falls most of the way but braces himself with his jet boots and lands safely.  The Mandarin’s cronies see Iron Man’s descent, but because no parachute opened, they assume that the invader must have perished in the crash.  Iron Man begins making his way to the Mandarin’s castle and is noticed by a group of the castle’s defenders.   Iron Man quickly dispatches the security forces.  Shell Head (one of Iron Man’s nicknames) uses his jet boots again to fly up the castle, avoiding several of the Mandarin’s traps. Unbeknownst to the Golden Avenger, the Mandarin has been observing him the entire time via an advanced monitoring system.

Next, the Mandarin uses a paralysis ray to halt Iron Man’s advance, but is thwarted by Iron Man’s chest beam by deflecting the weapon’s beam.  The Mandarin now turns to his ten rings to stop Iron Man.  First, the villain uses a blast of high frequency soundwaves, but the attack is repulsed by Iron Man using his own sound waves.  The Mandarin employees the paralyzer ray and this time is successful against the Golden Avenger, immobilizing the hero.

Back in the states, Pepper decides she need to take a date to the employee dinner gala, and reluctantly calls Happy.  Happy sees this as a sign that Pepper actually is interested in him.

In China, Iron Man has finally removed the effects from the paralysis ray; however, the Mandarin has taken counter measures including electrifying the chamber to prevent Iron Man from escaping.  As the Mandarin prepares to engage in hand combat with the Golden Avenger, Shell Head quickly devises a plan using quick calculations via his armor’s built in slide-rule.  Iron Man assumes the position that will create the most amount of pain for the Mandarin when his egotistical foe makes his attack.  Iron Man’s calculations hold true, and the Mandarin is writhing with immense pain from his strike on Iron Man.  Iron Man escapes while the Mandarin lies on the floor in agonizing pain.  The Golden Avenger takes to the skies and intercepts the military jet scheduled to pick him up and take him to the Pentagon to deliver his report on the Mandarin.

Tony Stark gets back to the states in time to be at the gala dinner that evening, and Happy and Pepper greet their boss when he arrives.