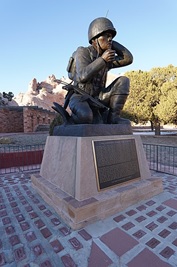 There are approximately 6,500 different languages spoken around the world, each one diverse enough to be unique.  One such language was used as a code language during World War II and those who spoke it were better known as the Navajo Code Talkers.  President Ronald Regan proclaimed August 14, 1982 “National Navajo Code Talkers Day” to recognize all tribes for their contribution to the war efforts and Arizona Governor, Doug Ducey, signed legislation making this day a legal state holiday every year on August 14th.

The first secret message during battle was during World War I with the Choctaw Telephone Squad organized by the US Army; however, the Marines and Navy soon followed.  The first class of 29 Navajo code talker Marine recruits was established in 1942 with the sole responsibility of developing and memorizing a unique military code using their unwritten language.  Navajo was chosen because of its complex language and because Technical Sergeant Philip Johnston, World War I veteran, spoke Navajo fluently having been raised near an Arizona Navajo Reservation where he played with Navajo children.

The Navajo code was unbreakable since the phonetic and grammatical structure was almost impossible to translate and/or transcribe and used during all attacks the US Marines led in the Pacific from 1942 – 1945.  The mission remained classified until 1968 and the Code Talkers who returned home from the war were not able to talk about it until it was declassified.  Upon their return many did face discrimination, hardship, and the lingering trauma of combat.  It is estimated that more than 400 Navajo men served as Code Talkers and in 200, the original 29 Navajo Code Talkers were awarded Congressional Gold Medals and the remaining members were awarded the Silver Medals by President George W. Bush.  Unfortunately, 13 Code Talkers were killed in action and none of the original 29 Code Talkers are alive.  However, there are still four other Code Talkers alive.

There is so much written about this fascinating company and their incredible efforts.  Celebrate their invaluable contributions and discover more about their history by checking out the following resources: