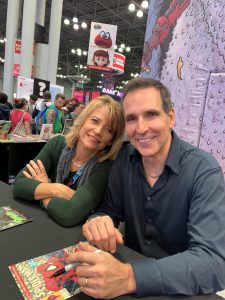 As a fan of 90’s comics culture, it’s unsurprising that I’m a big fan of Todd McFarlane. He was a cofounder of a comic label, the creator of the world’s longest-running independent comic series, and an entrepreneur and businessman on several fronts. He is a great example of how an artist and writer can make their childhood doodles into the entertainment giant of their dreams, and so much more.

Todd McFarlane is probably best known for his comic Spawn, but his path to the creation of

Spawn wasn’t immediate. His early sketches of the Spawn character were from his teens, he would draw the character over and over to perfect its visual aesthetic. He was a fan of comics and read as many as he could. Some of his favorite creators were Jack Kirby, John Byrne, Frank Miller, George Perez, and Alan Moore. He played baseball and studied art in college, splitting his work time between janitor duty on campus and a local comic shop. Although his dream was to be a comic creator, his path in life seemed to be professional baseball.

However, in his junior year of college, Todd suffered a severe ankle injury. In his downtime, he did all he could to focus on his school work, working, and drawing. After recovering for a year, he tried out for the Toronto Blue Jays but was placed last on the roster, closing that chapter of his life pretty much instantly. He got his degree, and luckily had been sending out submissions to comic editors throughout his college experience. He mostly submitted pinups, or highly detailed and brightly colored illustrations of characters meant to draw attention and be put up for display. He sent anywhere from 30-40 submission packages to editors a month; more than 700 after just one and a half years!

Many of his offers were rejected or never received a response, but the occasional one would come back with advice or a critique. One such bit of advice came from Sam Amendola of DC comics. He told McFarlane that he needed to focus on stories if he was ever going to get picked up for a comic, and that the pinups were good but didn’t demonstrate the right skills. He gave him a dummy script to try out, and McFarlane came up with a five page sample of the comic Coyote, which was accepted as a backup story and became his first published work.

His career snowballed after that, just a  year after graduating college. He began finding more and more work with DC and Marvel, working on Batman: Year Two, Infinity, Inc., and The Incredible Hulk. and eventually worked heavily on The Amazing Spider-Man. He created an iconic style for the superhero, drawing webs that were a lot more detailed and organic. He also drew the first full appearance of the villain Venom, whose appearance pretty closely resembled McFarlane’s Spawn character. He began to want more freedom in story writing, and was given a new series just called Spider-Man, where he could draw how he wanted and explore much darker themes.

These darker themes began to draw negative attention to McFarlane, 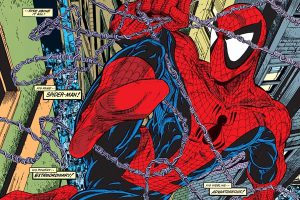 and Marvel wanted to represent a more lighthearted superhero and began once more to place restrictions on him. He became less invested in his work, and began to let deadlines slip. Issue #16 would be his last, after which he banded together with six other artists to form Image Comics. Image served as an umbrella company that allowed the artists to publish under their own labels, and McFarlane began to publish Spawn under Todd McFarlane Productions. Spawn #1 released in 1992 and sold 1.7 million copies, a record for independent comic books that exists to this day. Image became bigger and published more and more titles, and Spawn continued its dark and sprawling narrative with collabs with other artists and authors. They published Issue #301 in 2019, beating out Cerberus as the longest-running creator-owned series.

Todd McFarlane created a toy company in 1994 to sell action figures of his Spawn characters, and soon McFarlane Toys was creating action figures for shows, movies and celebrities like the band KISS or characters from the X-Files. He also created Todd McFarlane Entertainment, which created the first live-action Spawn movie. It was a success, but didn’t do too well critically and didn’t leave much of an impression on the minds of the fanbase. They did, however, have an animation studio and created Todd McFarlane’s Spawn, a cartoon for HBO that went on to win a Primetime Emmy. They also created a couple music videos, most notably “Do the Evolution” by Pearl Jam and “Freak on a Leash” by Korn.

Todd McFarlane took his art to heights many other comic artists might not have even dreamed of. He had a very clear vision of the sort of art he wanted to create, and did what he could to get there. Part of it was luck, but he also has an entrepreneurial spirit that pushed him to create toys, create movies, endless comic books, and help other comic artists achieve success. While his work might not be everyone’s cup of tea, I think his dedication to his craft is pretty admirable. Not many people have the drive to make all their creative dreams come true, and I think Todd McFarlane is one of the few people who can say he has.