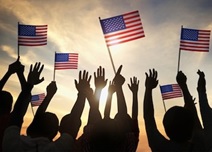 I am one who was born and raised in America and who respects American values.  As we celebrate Independence Day, one of America’s most important holidays, I thought this would be a good time to reflect at what the word patriotism means and how we have moved so far away from the beliefs that our founding fathers had when they founded this “land that we love” and call the United States of America.

Patriotism as defined in the Webster dictionary, is the love for or devotion to one’s country.  It reminds me of our founding father’s who put their lives, fortunes, and honor on the line.  The 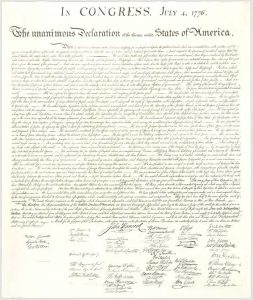 ones who fought for America in the very beginning to be free from the grip of England’s rule.  The ones who who wrote the Declaration of Independence had ambitions of a country with ideals that all men are created equal.  They are given not by government but by their Creator with certain unalienable rights.  Highest among those rights are life, liberty, and the pursuit of happiness.  Government must be limited to protecting the peace and preserving our liberties, and doing so through the consent of the governed.  It’s the right of a free people to rid themselves of a government that becomes destructive of those ends, as our Founders did in a supreme act of courage and defiance more than 200 years ago.

Call it freedom. Call it liberty. Call it whatever you want, but it’s the core on which this nation was founded and from which we stray at our risk. It’s what has defined us as Americans. It’s what almost everyone who has ever lived on this planet has yearned for, though only a few have ever risen above selfishness, ignorance, or cruelty to attain it. It makes life worth living, which means it’s worth fighting and dying for.

I understand that America has often fallen short of the exceptional ideas expressed in the Declaration. That hasn’t diminished my reverence for them, nor has it dimmed my hope that future generations of Americans will be re-inspired by them. Whatever our shortcomings, the fact remains that our Founders handed down to us a marvelous mechanism whereby we can fix those flaws and perhaps someday guide our form of government to as close to perfection as may be humanly possible. This brand of patriotism, in fact, gets me through the roughest and most distrustful times.

My patriotism is never affected by any politician’s failures, or any shortcoming of some government policy, or any slump in the economy or stock market. I’ve never felt my patriotism to be for sale or up for a vote. I never cease to get that rush that comes from watching Old Glory flapping in the breeze, no matter how far today’s generations have departed from the original meaning of those stars and stripes. No outcome of any election, no matter how adverse, makes me feel any less devoted to the ideals our Founders put to pen in 1776.

When I look at where our country is at today, the wisdom of what giants like Jefferson and Madison bestowed upon us becomes ever more apparent to me. I get more fired up than ever to help others come to appreciate the same things.

Freedom — understanding it, living it, and teaching it to future generations. That, my fellow Americans, is what patriotism should mean to each of us today.