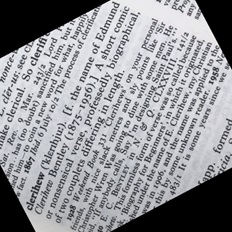 Today, July 10th is celebrated as National Clerihew Day in honor of English novelist and humorist Edmund Clerihew Bentley (July 10, 1875 – March 30, 1956).  He is credited with developing a poem style where the rules state:

Edmund Clerihew Bentley penned his first clerihew when he was a 16 years old student at St. Paul’s School in London.  He was in a science class and wrote about Humphry Davy, a Cornish chemist and inventor who invented the Davy lamp, more commonly known as a miner’s safety lamp, and several chemical elements and compounds.  It went like this:

Sir Humphry Davy
Abominated gravy.
He lived in the odium
Of having discovered sodium.

“Clerihew” was not officially a word until 1928 when the Oxford Dictionary documented it.  Of course Edmund Clerihew Bentley is not the only poet to write in this genre; however, he is considered to be the best clerihew writer.  Here are a couple of his other works:

George the Third
Ought never to have occurred.
One can only wonder
At so grotesque a blunder.

Edgar Allen Poe
Was passionately fond of roe.
He always like to chew some
When writing something gruesome.

Clerihews poke fun at people whether they are real or not.  They are meant to be funny; therefore if you cannot take a joke, you may not want to read them.  However, if you are interested in exploring the world of Clerihews, check out these resources: