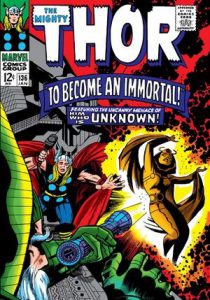 Profession: Warrior-Goddess of the Vanir

Synopsis of First Adult Appearance: “To Become an Immortal!”

After an adventure involving the High Evolutionary in Wundagore Mountain, Thor explains to his mortal love, Jane Foster, that Odin has consented to all of them to get married and must make their way Asgard.  Jane is almost overwhelmed with transport process, which then reaches an eleven when she sees a party of warriors returning home via the Bifrost Bridge with a Troll as prisoner.

Jane is further startled when she meets Heimdall.  Thor decides that it is time that his love meet his father.  Jane is awestruck with the King of Asgard.  With the pair’s impending nuptials fast approaching, Odin uses his vast powers to turn Jane Foster into a god.  Jane is now an immortal and has acquired the ability to fly.  Jane has never been trained in her new abilities of flight and Thor must come to her aid.

A final challenge to prove Jane’s worthiness as a god is prepared; she is locked in a room and must face the Unknown to see if she has the courage to be a god.  Jane is beyond frightened by the creature, and cowers in terror.  Thor is forced to rescue her and defeat the creature.  Jane finds being a god completely overwhelming, she begs Odin to turn her back into a mortal and erase her memory of Asgard.  Thor protests, but Odin complies with Jane’s wish and she is sent back to Earth.

Thor continues to protest but Odin enforces his will upon his son and he accepts Jane’s situation.  Odin then sends Thor to the realm of Gundersheim to protect the Glades of Crystals from attack by Trolls. On Earth, Jane suddenly appears in a hospital.  Jane has no memory of the events that took place on Asgard, and Odin has manipulated events so that Jane is soon to be hired as a nurse for Dr. Kincaid (who looks quite a bit like Dr. Donald Blake, Thor’s mortal secret identity). Meanwhile, Thor has just wrapped up his battle with the Trolls when he is confronted by his old love, Sif.  The Prince of Asgard and the War-Goddess reconnect instantly and rekindle their old romance.  Odin is watching the situation between the two unfold and is pleased his son has found love again.