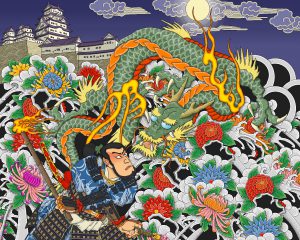 The art of tattooing goes back for centuries in Japan. The art of Japanese tattooing, or “irezumi”, literally translates as “inserting ink”. They interchangeably also use the words “bunshin: patterning the body” , “gei: tattooing”, and “shisei: piercing with blue”; synonyms that can be read the same but have different contexts and subtle differences in meaning. There’s some speculation on when the art form started and how commonplace it was throughout Japan, but the furthest concrete evidence gets us is 300 B.C.

Some experts claim there is evidence to support that Japanese tattoos go back as far as 10,000 BC, with trauma markings found on remains in the area consistent with a tattoo design or marking. While this evidence seems pretty solid, not many historical texts can corroborate that the practice of spiritual or ritualistic tattoo was common outside of the indigenous Ainu peoples of northern Japan. 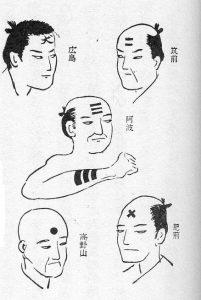 By 300 B.C., more textual evidence began to exist suggesting tattoos had become more common, and they were often used to denote some sort of spiritual or social meaning, and occasionally just as skin decoration. This period was fairly short-lived, however, and by 300 A.D. tattoos had already been appropriated for marking criminals as punishment. Some regions would tattoo a black band around the forearm of a criminal each time they were arrested. More extreme versions of the punishment would be marking the forehead, either with a solid black dot or line for each arrest, or sometimes an X. The most extreme practice, however, would be to add lines in the shape of the Japanese character “inu”, or “dog”. The forehead tattoo was hard to hide and even harder to remove, making it emblematic of criminals.

From this time period on, Japanese tattoos stayed pretty stagnant as far as its role in society went. Punishment tattoos varied in application based on how sadistic or harsh a city chose to be. Decorative and spiritual tattoos could be seen from time to time, and an occasional pair of lovers tattoos- tattoos on a couple that combined to form a continuous image- could be found. It wasn’t until the Edo period that it really blossomed and transformed into what is commonly considered “Japanese tattoo”.

In around the 1700’s, woodcarving and printing became much more popular. The story “Suikoden” was released, depicting brave warriors covered in tattoos of dragons, flowers, tigers, and cultural symbols. It was an instant success, and with that success came a massive influx of demand for similar tattoos. There’s debate as to where tattoos entered society, but it was common to see merchants flaunting their wealth via elaborate tattoos, and firemen to receive tattoos to keep them safe. The same woodblock artists who illustrated stories began to adapt their carving tools for use on human skin, even using their printing ink, “nara black”, which would fade to a distinctive dark green.

Eventually the use of tattooing to show wealth or flaunt endurance or commitment made it a prime candidate for popularity with the Yakuza gangsters. Artists would serve groups of gang members, teaching apprentices, spending days on a full backpiece or a bodysuit. This was around the Meiji period, where Japan began to open its borders, and tattooing began to be outlawed. These laws were not only to make a good impression on the outside world, but also to discourage Yakuza from being tattooed, leading to the criminalization of tattooing in modern day Japan.

To this day, it is illegal to have a shopfront for tattooing in Japan, but many artists still keep the art form alive. They get their customers from word of mouth, and maintain secrecy to avoid persecution, even though most if not all their clientele are unaffiliated with any gangs. Some artists even refuse to tattoo gang members, signs, or script.

With the spreading popularity of tattoos in the West, Japan has begun to loosen their strictness towards tattoos on visitors and tourists, but they’re still frowned upon if visible in public, and can get you denied entry at hot springs and pools, among other places. Hopefully this normalization continues, however, so that traditional Japanese irezumi artists can carry on their tradition and maintain this important piece of Japanese cultural history.

For more information about irezumi, feel free to check out the reference links below.