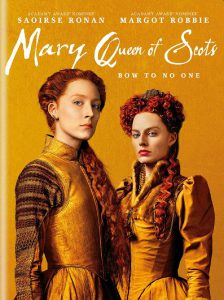 Everyone knows who Elizabeth I is but how much do you really know about her rival for the English throne, Mary, Queen of Scotland? There have been many adaptions of her life; she has been played by the likes of Bette Davis, Judi Dench, and Helen Mirren. Most films show her as a power-hungry woman who went too far. However, director Josie Rourke takes a more accurate look at the life of the Scottish Queen. Rourke shows the Queen’s fall to be caused not by her want of power, but by the number of treacherous men around her who schemed and lied to get what they wanted. The film focuses on Mary’s rise to the throne including three marriages, two murders, and a rape while following her attempts to secure herself as the successor to the English throne.

The thing about this movie that comes out the most is the acting; both Saoirse Ronan and Margot Robbie are amazing in this film. The contrast between Robbie’s often controlled and ironclad performance and Ronan’s spirited performance and openness gives the viewers a look at how very different these two rulers were. The difference being that while one queen demanded independence to do what she wanted and lost her throne, the other was willing to give up her happiness and play the game, which led to her keeping her throne. This film and others like it can be found in the Bellevue University Library General Collection and may be borrowed for one week with the option to renew once.