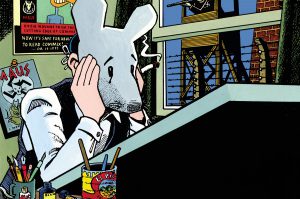 Art Spiegelman is one of the most well-known adult comic creators. My introduction to him was through Maus, his autobiography-biography that followed him documenting his father as he recalled his time in the Holocaust. Maus garnered a lot of attention for its time, received a special Pulitzer award, and is one of the first books ever to be considered a non-fiction graphic novel. However, Spiegelman’s personal story doesn’t start with Maus, nor does it end there. He was a prolific artist for almost all of his working life.

Art Spiegelman was born in Sweden in 1948, his family immigrated to the US in 1951, initially settling in Pennsylvania but eventually ending up in Queens NYC. He started early with art, taking a lot of inspiration from parody and subculture media like Mad magazine and the comic books of the day. By the age of fourteen, he was already submitting art and comic strips to fanzines and minor publications, and had even created his own magazine, “Blasé” which he had modeled after Mad Magazine and distributed at his junior high school.

By the time he was in high school, he was already selling artwork to various publications, and even had to turn down the chance to publish a syndicated comic strip. Art refused the offer mostly because it clashed with his own ideals about art; that art was for expression, and was meant to be ever-changing in both style and meaning. He finished off his primary education at the High School of Art and Design, and while he was there met Woody Gelman, the art director for Topps Chewing Gum. Gelman all but promised him a job upon his graduation, and Art took him up on it.

After graduating in 1965, Spiegelman enrolled at Harpur College to study art and philosophy, and maintained a freelance contract with Topps. He began publishing his works in the school paper and humor magazine, and became very involved in the new and mysterious underground “comix” scene. His work became more subversive and deep, and he began self-publishing his own mini-magazines and comics more commonly. Seeing as he now spent time on a college campus and had built somewhat of a name for himself, distribution became much more easy and widespread.

During his time in college, his job at Topps also progressed. He became a key member in the Products Development Department, and became one of the co-creators of the iconic Wacky Packages and Garbage Pail Kids collectible art cards. These cards parodied celebrity and consumer culture, often depicting gross-out parodies of Cabbage Patch Kid dolls named and modeled after celebrities and world events of the day. These collectible cards became a staple of 90’s culture, counterculture, and are still being sold to this day.

He never finished college, however, and hit a particularly rough patch around the time he would have. He dropped out due to a severe nervous breakdown, and spent a month in Binghamton State Mental Hospital. Shortly after his release he moved back in with his parents, only to have his mother commit suicide following the death of her only brother. Spiegelman began to detach from his remaining family, and after multiple trips to and fro, finally moved to San Francisco in 1971, clear across the continent.

While in California, Art took work where he could find it and dove deeper into the comix movement, as it was in its heyday. It took him a while to find his motivation and drive again, but in 1972 he was asked to create a strip for a magazine to be released, “Funny Aminals“.  As common with the subversiveness of comix culture, the theme was combining the cartoony and childish nature of animal cartoons with deep, serious and adult issues; in this specific case, racism. Through this challenge, Art conceptualized “Maus”, the story of his father surviving the Holocaust, with the Nazis depicted as cats and the Jews depicted as mice. The narrator was a mouse referred to as “Mickey”.

By the mid-70’s the comix movement had slowed its pace, and Spiegelman still found work but was better able to explore his options. He moved back to New York and began to talk with a French  architectural student and artist Francoise Mouly, after she was so moved by one of his comics, “Life on the Hell Planet”, an autobiographical depiction of him coming to terms with his mother’s death. They began to talk more frequently, having long phone calls that quickly deepened their relationship. Spiegelman followed her to France when she resumed her studies, and she followed him back to New York upon her completion. Having encountered some problems with her visa upon arrival, the couple quickly solved the problem by getting married.

Together they founded and fully produced a magazine, “Raw“, that highlighted less-to-unknown artists in the comix scene, as well as all manner of political and environmental issues. The magazines were a blend of media, capitalizing on the artistic, architectural, and production background of the couple. Francoise even bought her own manual offset printer and together they created all 11 issues of their magazine. They were an instant hit, printed on high quality and thick paper, often featuring fold-out posters, one of a kind art prints, and gimmicks relating to the topics discussed therein.

By this point Spiegelman began interviewing his father about his time surviving the Holocaust in earnest, and began writing what’s now published as the Maus book. The full graphic novel differs from the original strip in that it was researched, told directly from the primary source, and had a much higher degree of care and attention to detail put into it. Maus II was released a while later, and a collected “Complete Maus” was eventually sold.

Spiegelman’s fame and powerful art opened the world to him, with all sorts of projects from professors positions, work with the New Yorker, and even collaboration on an art book honoring and discussing the tragedy of 9/11. The impact of his artwork truly cannot be understated. He shook the world’s ideas of comic art, parody, comedy, journalism, and biography.