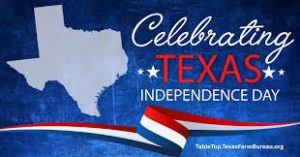 Texas, currently known for being the second largest U.S. state has been a region sought out by many different countries throughout its history.  In fact, Texas has been claimed by six nations.  As early as the 16th century, Spanish explorers mapped the coastline of Texas and claimed the land for Spain. In the late 17th century, France claimed the region and established Fort St. Louis in 1685. Then Spain took the area back from France and later in 1821, Mexico gained its independence from Spain and claimed Texas as part of its territory. Due to American colonial Samuel Austin arriving with around 300 families, Texas began to grow rapidly. After some back and forth between Mexico and the colonials, the Texans declared their independence from Mexico on March 2, 1836. However, Texans remained vulnerable to attacks from Mexico. On December 29, 1845, Sam Houston convinced colonial leaders to join the United States and in doing so, Texas was admitted as the 28th state.

More information about Texas and its unique history can be found in the Bellevue University Library. Print resources can be borrowed for three (3) weeks.

In a Narrow Grave:  Essays on Texas with a New Preface. By Larry McMurtry

Living With the Texas Shore. By Robert A. Morton.