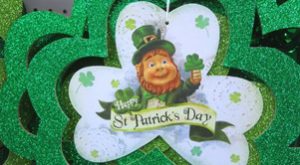 We all know that Saint Patrick’s Day is March 17th.  You may even know that it started as a religious observation.  Today it has turned into everything Irish.  Here are some interesting facts about this world renowned festivity.

According to his autobiography, “Three Leaves of the Clover, The St. Patrick Story,” he was born in Bannavem, Taberniae in 386 A.D. At the age of 16, in 411 A.D., he was kidnapped, enslaved, and sent to the mountainous countryside of Ireland to work tending sheep. In 415 A.D. he was able to escape his captors, following a dream in which God told him to flee to the coast, where he would find a ship to return to Great Britain.  Upon St. Patrick’s return to Great Britain he had a second dream, this time featuring  the people of Ireland, begging him to com back to them.  In response to this dream, St. Patrick began studying for the priesthood, eventually becoming a bishop for the Catholic Church.  In 433 A.D. St. Patrick returned to Ireland as to convert the Irish to Christianity.  March 17, 461 A.D. St. Patrick died in Ireland, after almost 30 years of missionary work.  St. Patrick was largely forgotten after his death.  It wasn’t until after centuries of myth’s surrounding St. Patrick’s life and works that he was recognized as and named Ireland’s patron saint. 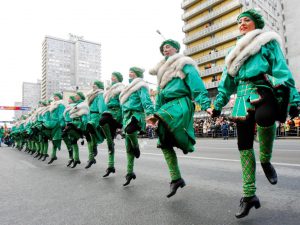 The first St. Patrick’s Day parade took place in New York City on March 17, 1762, in which Irish soldiers serving with the British marched a few blocks to a tavern in lower Manhattan, NY.  Ireland didn’t stage their first parade until 1931.  More than 100 St. Patrick’s Day parades are held in the United States, the largest celebrations taking place in New York City and Boston.

Shamrock is the symbol of Ireland. It was associated with St. Patrick as legends claim that he used the shamrock to teach people about the Holy Trinity.  Shamrocks don’t exist.  We know them as any three leaf plant such as wood sorrel, or white and yellow clover.

From Blue to Green

Blue was the original color of St. Patrick’s Day as it is the dominant color of the ancient Irish

flag.  However, after the Irish Rebellion in 1798, the Irish soldiers differentiated themselves from the British (who are wearing red clothing) by wearing full green uniforms. The shamrock on their hats was a symbol of rebellion.  To show their love for the green, in 1962, a portion of the Chicago River was dyed green in celebration of St. Patrick’s Day, and has continued ever since.

Tale of the Snakes

While St. Patrick has been known for his work in building churches, monasteries, and schools, legends of his other ‘miracles’ also exists. The most famous one is that St. Patrick banished all the snakes in Ireland. The problem with the myth was that Ireland never had any snakes.  It is an old myth started by monks, and most likely symbolizes St. Patrick driving the Pagan beliefs out of Ireland and bringing Christianity.

St. Patrick’s Day use of the leprechaun has no direct relationship to St. Patrick and actually originated from a 1959 Walt Disney movie featuring a very Americanized version of the Irish folklore characters. This American leprechaun quickly evolved into a highly recognizable St. Patrick’s Day symbol- King Brian from “Darby O’Gill & the Little People.”

Corned Beef and cabbage is the traditional meal of St. Patrick’s Day. However, to save money, some celebrate with Irish bacon in New York.

Drinking wasn’t always a thing on St. Patrick’s Day celebrations. Too much drinking and partying has led the government to ban pubs from selling liquor in 1927 until 1970.

It’s also a Holiday in the Caribbean

Ireland is not just the country that celebrates March 17 as a national holiday. it is also a national holiday in the Caribbean on the island of Montserrat. In the 17th century, a large number of Irish emigrants landed there. To this day, their population of 4,000 mainly are from Irish decent.

To find out more about this popular holiday, check out these books or Pinterest from the Freeman/Lozier Library.