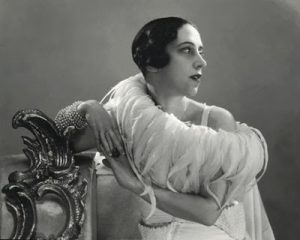 The world of the 1900’s was tumultuous, to say the least. The first 50 years of the century saw two World Wars, fluctuations in world economy, and the beginning of a more unified world culture. This was a time for artists, authors, and visionaries to rise to great heights, share their influence across the world, and establish the roots of what we would now consider “pop culture”. Though not well known by name, the fashion designer Elsa Schiaparelli was one such artist. Her avant-garde styles and creativity left a lasting impact on the world of fashion, entertainment, and even recreational sports!

Elsa Schiaparelli wore many hats in her early life- figuratively, of course. She was born in 1890 in Rome, daughter of an aristocrat mother and well-educated father. Her uncle was an astronomer, and one of her father’s cousins was the Egyptologist who discovered the tomb of Nefertari. These rich cultural and historical influences heavily influenced her upbringing, and she carried a passion for learning about history, cultures, and religious rites well into her young adulthood. This culminated in her writing a book of poems about the Greek tradition of the wild hunt, a poetry book that featured imagery and subject matter her parents ended up finding rather distasteful. They tried to send her to a convent in Switzerland to calm down her mind, but relented and let her return after she protested with a hunger strike.

Elsa originally wanted to become an actress, but her sense of adventure and overactive imagination led her away from this goal and onto the path of seeing what her future had to offer. She was in her early twenties, and had her whole life ahead of her. Furthermore, her parents had begun to slowly pressure her towards marrying a Russian aristocrat that she had no feelings for, and this escalated until she fled to London and got a job at an orphanage.

In France, she began to explore a little more and started to attend lectures on “theosophy”- a religion/philosophy revolving around psychic phenomena and the supernatural. It was here that she met Willem de Wendt, and fell head over heels for him. They were engaged the day after they met and married not long after, in July of 1914. They bounced across the continent, Willem often being uprooted or kicked out for being a charlatan. Despite her husband’s primary income being the work of a psychic healer, Elsa supported him and helped in whatever way she could. Their main financial support came from Schiaparelli’s dowry and a meager allowance given her by her parents.

They ended up in New York eventually, where Elsa had a child. This scared Willem off, and without missing a beat Elsa returned to Paris and had her daughter Gogo’s last named changed back to Schiaparelli. The young Gogo was diagnosed with polio very young, and Elsa spread herself thin caring for the girl while staying afloat as a single mother. Her friend Gaby Picabia was of great emotional support to her in this tough time, and it was through her husband, famed painter Francis Picabia, that Schiaparelli first began to foray into the art world.

Elsa became entrenched in the Surrealism and Dada art movements, moving in social circles with Man Ray, Marcel Duchamp, and Salvador Dali, to name a few. Their art and her own imagination spurred her to enter the world of fashion, and her first

collection of clothes came out in 1927. They were hand knitted shirts and sweaters, often black and white and depicting a tie or bow on the front of the shirt. She also began dressmaking, but would form her designs by draping fabric on the models or herself instead of relying on patterns. Her early knit designs were a smash hit, and were soon a nationwide sensation, being worn by socialites and professional athletes alike.

By 1934, she had become the first female fashion designer to be featured on the cover of Time magazine, and her innovations were taking off. She designed built-in bras for swimsuits, suit jackets for women, colored stockings, and high-fashion wrap dresses, all which were game changers at the time. She began making perfumes, with fancy bottles designed by her artist friends in weird and interesting shapes like pipes, dress forms, and candles. She pioneered designer sunglasses, and a particular shade of pink: Shocking Pink, her trademark color. This was the first real push of saturated pinks into the mainstream, effects of which we can still see today.

In its heyday, her fashion house employed over 800 people, and had 8 different atelier’s offices. On the onset of World War II, Elsa left control of her fashion house to her second-in-command in 1941 and left to tour and raise money to help the French people affected by the war. This desire to help also applied to her fashion houses, staying open with reduced hours so she could still pay all of her employees, however meagerly, and not leave them jobless in such a hard time.

Her post-war innovations continued, with lines of designer glasses frames, even more perfumes, and lines of costume jewelry with over-the-top themes like gigantic bugs or vegetables. She continued to do her own thing right up until the end, when in 1954 she closed her fashion house and began writing her memoir, “Shocking Life”. The perfume manufacturing continued, however. Her life and work left its mark on the world as a whole, changing the course of the art world, the fashion world, and even bringing aid to countless men and women in France during the war. She was a true creative genius. The next time you see the color hot pink, hopefully you’ll remember a little bit of the woman that made it happen.