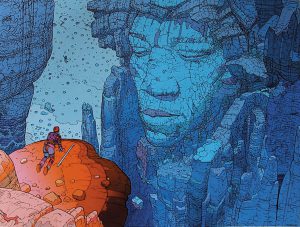 Have you ever seen the movies Alien, Tron, or The Fifth Element? What about Blade Runner, Hellboy, or any of Studio Ghibli‘s many films? If so, chances are you’ve seen the influence of Jean Giraud, the French sci-fi comic artist also known as Moebius. Lauded as one of the greatest comic artists of all time, his life of art making was prolific and varied, and spanned multiple decades of recent history.

Jean Giraud was born May 8, 1938 in the suburbs of Paris. He was an only child, and was primarily raised by his grandparents after his parents divorced when he was 3. Coming of age in post-WWII Europe, he would often go to local theaters to distract him from the world, and spent many hours engrossed in B-movie westerns. He gained a deep appreciation for the storytelling and genre of them, and this followed him well into his artistic career.

At around the age of 10, Giraud’s mother enrolled him at a local boarding school, where he became exposed to the world of Belgian comic magazines, with such comics as “Tintin” and “Spirou.” This inspired him to start drawing his own one-off western comics. By 16, he was enrolled in the Duperre School of Applied Arts and continued to make these western comics. His classmates tended to enjoy them, but the school didn’t care much for the less dignified nature of his art. This schooling was the only technical training he received as an artist, and he only stayed for two years. He withdrew without graduating to visit his mother in Mexico, and spent nine months there with her and her new husband.

Mexico brought things full circle for Giraud. The landscapes and terrain of the Mexican deserts so closely matched the westerns he had obsessed over as a child, and seeing and exploring them in person left a deep impact on his art, his creative process, and him as a person. He returned to France in 1957, and worked for a publishing company as an illustrator for a couple years, during which he continued to create short Western comics and publish them to varying levels of success.

This lasted until he was drafted for military service in 1959. First in Germany, then in Algeria, caught up in the vicious and brutal conflict of the Algerian War. His skills allowed him to avoid the frontlines, however, and he spent the large duration of his military service illustrating for an armed forces magazine and completing logistics duties. His time in Algeria also left an impact on his creative mind, and he absorbed much of the culture, landscape, and experience to further influence his art.

Once his service concluded, Giraud decided not to go back to the publisher he had worked with before, deciding that he had outgrown them and needed to follow his own path. Instead, he accepted an offer to apprentice under the artist Jije, also known as Joseph Gillian. Jije was a major role model of Giraud’s, as he was the creator of the comic “Spirou” that had such a profound role in getting him into comic art in the first place. Jije had followed Giraud’s growth as an artist during his time illustrating in the military, and gave him the role of lead illustrator for his comics.

However enthusiastic, this proved to be too much for Giraud, and instead inked Jije’s drawings for him. The experience was still invaluable to Giraud, and though the apprenticeship only lasted a few short years, their connection lasted the rest of their lives. Giraud’s work was often compared to Jije’s for the years after, but in every instance Jije defended his artistic integrity and gave his compliments, boosting his ego and empowering him as an artist.

In 1974, Giraud started to work under the pseudonym “Moebius”, and had been self-publishing small comic strips sporadically for years. He was hired to work with renowned and controversial filmmaker Alejandro Jodorowsky on a film adaptation of Frank Herbert’s sci-fi classic “Dune”, and provided extensive art direction and costuming for the movie. The movie got lost in production, though, and Giraud recycled much of his art and world building for a later work, the full-color graphic novel “The Incal“, a collaborative work with Jodorowsky. “The Incal” remains a shining example of his comic style, bright colors, elaborate and sprawling futuristic landscapes, and diverse casts of characters.

His major works besides “The Incal” include the epic and winding western narrative “Blueberry“, a comic series following the anti-hero gunslinger Mike Blueberry, a man who follows his own intuition and broke free of many of the stereotypes of western storytelling. He also worked on an art magazine with some friends, “Metal Hurlant”, which chronicled a web of interconnected sci fi stories. He contributed art to the “Alien” movie series, and was close personal friends with Hayao Miyazaki, co-founder of Studio Ghibli. He even named one of his daughters “Nausicaa” after the titular character of one of Miyazaki’s movies.

Creatives like Hellboy’s Mike Mignola, Star War’s George Lucas, and Blade Runner’s Ridley Scott, all cite Giraud as an influence on their work. He was a genre bender, an artistic powerhouse, and a creative genius not only for science fiction, but also the world of western comics and graphic novels as a whole. If you get the chance to read one of his works, or even just view a gallery of his works online, I highly recommend it. Giraud/Moebius had one of the most profound impacts on the sci-fi and literary world of any one artist, and his works have truly stood the test of time.

Some examples of his work: 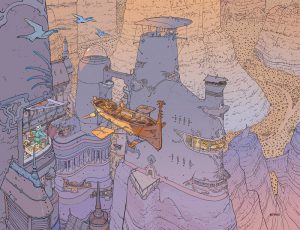 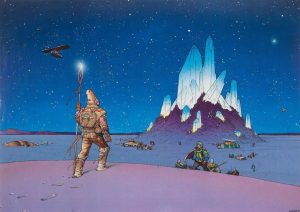