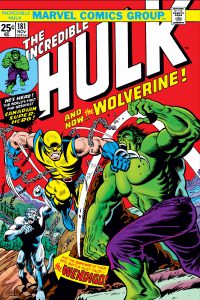 Synopsis of First Appearance: “And Now… the Wolverine!”

Wolverine jumps out of a rocky hill between the Hulk and the Wendigo. The future X-Man climbs up the Hulk’s back attempting to pierce his skin with his adamantium claws. Even the claws encased in the in the legendary metal cannot scratch the savage Hulk’s gamma ray infused skin. Wolverine realizes that continuing to battle the big green brute is futile, so he springs over the Hulk’s head and throws himself at the Wendigo. Wolverine’s decision is the right one as his claws pierce Wendigo’s hide.

The Hulk is uncertain as why Wolverine is now attacking the Wendigo, but concludes that the enemy of my enemy is also my friend and decides to attack Wendigo as well. The Hulk grabs the monster and smashes him on a grove of trees. Wolverine uses this opportunity to stick a claw in the beast’s throat. Normally, this would be a fatal blow but the Wendigo is an immortal creature and the cut merely renders him unconscious.

With the Wendigo down for the count, the two A list Marvel characters go at it again. The fight is extreme but ultimately brief as two bystanders, Marie Cartier and Georges Baptiste, use a concoction of chemicals to knock both brawlers out.

Marie is the sister of the man who is currently possessed by the spirit of the Wendigo, and hopes to use an occult ritual to drive it out of her brother and on to the Hulk. Suddenly, the Hulk reverts to Bruce Banner and Georges declares that he will not go along with Marie’s plan. It was one thing to put the curse on a very low intelligence monster but now that he has reverted to an innocent man her actions are beyond wrong. Georges walks away in anger and disgust.

Next, Marie decides to drag Banner’s body to a cave where the unconscious Wendigo is lying. Unfortunately, Banner awakes and transforms into the Hulk. Wolverine has also shaken off the chemical’s effects and he and Hulk begin their brawl anew. Marie attempts to flee the throw down by running into the before mentioned cave. The Hulk throws a massive punch at Wolverine who is able to roll out of a direct blow and only receives a glancing blow, but even that amount knocks out Wolverine.

Now inside the cave, Marie finds that Georges has completed the occult ceremony the pair had planned to perform and moved the spirit of the Wendigo from Marie’ s brother to himself. As Georges’ intelligence is stripped away, he admits that he loves Marie. Now fully the Wendigo, the monster smashes through a section of the cave and moves out into the forest. Marie’s brother, Paul Cartier, is now free of the curse.