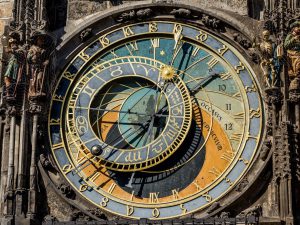 With the new year upon us, you might stop to think about our calendar. Why does the new year start in winter? Where did the name “January” come from? You might even have a little more insight, such as “Why is December the 12th month when its name means ten?”. These are all valid questions, and things you might not exactly know the answer to. Much like any cultural or linguistic evolution, the names of the months developed over centuries, but is deeply rooted in ancient Rome.

Our current calendar model is the Gregorian calendar, named after Pope Gregory XIII in 1582. It modified the existing Julian calendar, established by Julius Caesar in 46 BC. The Julian model of the calendar was an adjustment made to an even older Roman calendar model, which doesn’t have a distinct name. The original Roman calendar was still a 12-month year, however, something most people don’t realize. Only ten of the months were named, as the two final months of the year were the winter months. The calendar was built to help track a largely agrarian and militaristic lifestyle, so there was not much use planning invasions, harvests, or festivals in times where it was too cold to do so.

This original calendar with 10 named months had an interesting naming scheme. The year also began with February, oddly enough. February comes from “februa”, which means to cleanse. February would be a time of festivals and rituals meant to cleanse and prepare for the coming year. March comes from Mars, the roman god of war, as March was often the time of year that military operations would resume in earnest after winter had stopped them. April comes from “apri” or “aperio”, which means to open. This “opening” referred to the blossoming of flowers and plants, as April is when the spring climate is in full swing. May comes from Maia, the roman equivalent of a “mother earth” type character. This reflected the nurturing and tending to plants that would be done during this time, getting a good start on the crops of the year to ensure a good harvest. June was simply named after Juno, the roman mother goddess and patron of marriage and women. Marriages were often conducted in June, the early summer, for good luck and prosperity, but also because it wouldn’t interfere with any farming operations.

After June, the rest of the year was named after the numbered order of the month. There’s speculation on what the sixth month would be called, perhaps “Sectember”, but September (sept- seven), October (oct-eight), November (nov-nine), and December (dec-ten) all fell into their proper place. The year would end with the two unnamed winter months, and the year would start again in February.

This all changed when Julius Caesar put his mind to it. Together with the help of some mathematicians, he decided to make some major changes to the year. He adjusted the days per year to be 365.25, meaning every four years there would be a leap year. He also replaced the ordinal months after June with July and August, reflecting the names of the Roman king ‘Julius, Augustus”. In the process of renaming, he also named the two unnamed months that ended the year. One was now December, pushed down by the introduction of August, and the other was January, after the god Janus.

Janus represented beginnings and ends, doorways, new paths. Caesar therefore also decided that January would be pushed up to become the first month of the year, and not the last. This split the seasons across the years, and changed how the months were treated socially in general. Later emperors tried to rename the other ordinal months, September through December, but nothing really stuck, and they remained to this day, making July and August the only ones to be renamed in this unique way.

Pope Gregory XIII had to make some adjustments to this almost a century and a half later, though. He didn’t rename any months, but anglicized the names to reflect the more common languages of the time, and adjusted day lengths. See, when Julius Caesar’s mathematicians changed the year to 365.25 days, they were off a tiny fraction. This tiny fraction made it so the year would gain an extra day every 128 years, a phenomenon called solar drift. This wasn’t a big enough phenomenon to be noteworthy before the fall of the roman empire, but by 1582 the year had drifted by just under two weeks, leading to seasons not quite lining up and festivals celebrating spring or summer being unseasonal.

After this adjustment, we were left with the same names, the same leap years, and a slightly more accurate year length. This Gregorian calendar has served us well for the past half century, but who knows what the new year, the next decade, or even the next few centuries hold for our calendar. As long as none of our rulers try renaming October after themselves, I’m sure we’ll be fine.